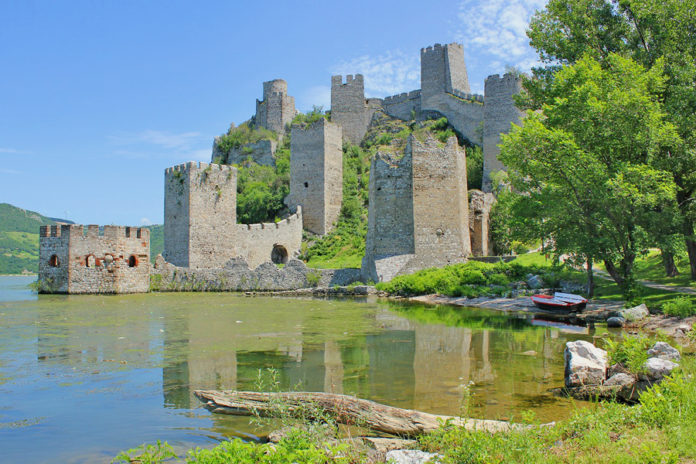 The Golubac Fortress  was a medieval fortified town on the south side of the Danube River, 4 km downstream from the modern-day town of Golubac, Serbia.

The fortress, which was most likely built during the 14th century, is split into three compounds which were built in stages. It has ten towers, most of which started square, and several of which received many-sided reinforcements with the advent of firearms. Golubac Fortress has had a tumultuous history. Prior to its construction it was the site of a Roman settlement. During the Middle Ages, it became the object of many battles, especially between the Ottoman Empire and the Kingdom of Hungary. It changed hands repeatedly, passing between Turks, Bulgarians, Hungarians, Serbs, and Austrians, until 1867, when it was turned over to the Serbian Knez, Mihailo Obrenovic III. Now, it is a popular tourist attraction in the region and a sightseeing point on Danube boat tours

Location : Golubac, in the Branicevo District of north-eastern Serbia and on the modern-day border with Romania, marks the entrance to the Derdap national park. It is strategically located on the embankment of the Danube River where it narrows to form the Iron Gate gorge, allowing for the regulation and taxation of traffic across and along the river. In the Middle Ages, this was done with the aid of a strong chain connected to Babakaj, a rock on the far side of the river.
Significance : Considering the age and location of the Golubac Fortress, it is both large and well-preserved. Its placement at the head of the Iron Gate gorge allowed for easy control of river traffic. It was the last military outpost on that stretch of the Danube river, which caused it to frequently be part of the final line of defense between Hungary and the Ottoman Empire, especially during the periods when Serbia was Ottoman-held. The importance of the fortress is further indicated by the attention it received from Sigismund and Murad II, rather than just fighting between locals and commanders of nearby cities. The Golubac Fortress was declared a Monument of Culture of Exceptional Importance in 1979, and it is protected by the Republic of Serbia.

With the Belgrade fortress, it is today the only cultural monument in Serbia which has its own administration – a state company founded specifically for handling the fortress.

Tourism : The partially renovated fortress was officially open for tourists in the autumn of 2016 and had 63,000 visitors in 2017 despite there is nothing more to see in the fortress except from the view and the small exhibition “Panorama through the centuries”, so the administration expected no more than 10,000 visitors. Almost one third, 20.000, were foreign tourists. Two piers, one larger and other smaller, are placed in the Danube, but the touristic boats are not allowed to dock until the fortress is officially declared a port area. Also, there are plans for bringing the model cannons into the cannon tower.

In April 2018, four towers will be open for public: 6, 7, 8 and 10, or the cannon tower. The tower 8 will host a three-floor exhibition dedicated to the knights, with a section devoted to the Polish knight Zawisza Czarny. Plans include the joining of the attractions in the vicinity, like Derdap national park and prehistoric site Lepenski Vir, in one tourist arrangement.

Access : Coordinates: 44.660717, 21.677914 / By car :  Access to Golubac from the highway Belgrade-Kladovo, also named Djerdap roadway. If you are coming from Belgrade, you need to cross 130 km. if coming from the direction of Nis, the best way to go is across Zajecar, Negotin and Kladovo. By boat : the best way to visit Golubac fortress is by boat, on the blue waves of the Danube. There are guided boat tours from Belgrade, but also there are numerous cruisers coming from Europe.
Attractions nearby : Djerdap National Park , Lepenski Vir , Ram fortress , Srebrno jezero ( Silver lake ) , Djerdap gorge , the drina house.