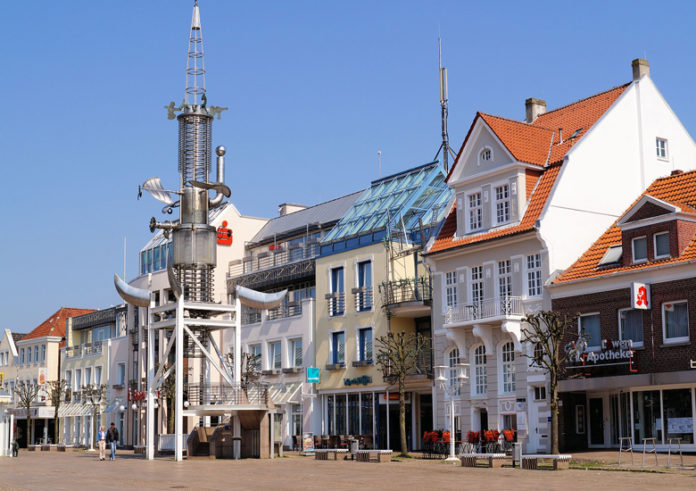 Aurich  is a town in Lower Saxony, Germany. It is the capital of the district of Aurich.

History : The history of Aurich dates back to the 13th century, when the settlement of Aurechove was mentioned in a Frisian document called the Brokmerbrief in 1276. In 1517, Count Edzard from the House of Cirksena began rebuilding the town after an attack. He established the town centre, which is still in place today. In 1539, the land authorities were brought together in Aurich, making it the county capital and, later,

From October 21, 1944, until December 23, 1944, a Nazi concentration camp was established in Aurich. The camp was a subcamp to the Neuengamme concentration camp. After World War II, Aurich became part of the new state of Lower Saxony. Coat of arms : urich’s coat of arms is drawn by the blazon: “Arms: Landscape with chief two-thirds sky and base third earth, a shield Gules emblazoned with letter ‘A’ Or, an open-topped crown Or above, two growing trees Vert at sides. Crown: A battlement Gules with three merlons and two embrasures. Supporters: Two branches of mistletoe with leaves and berries Or.”.Note that the coat of arms of the eponymous district differs.

By car :  Aurich is not connected to the motorway network. However, the city is located on the main road 210 between Emden and Wilhelmshaven and the federal highway 72 between Norddeich and Oldenburg, where connection to the A28 exists. By boat :  Sport boat owners reach Aurich via Ems-Jade-Kanal from Emden.By bicycle :  The Frisian route Rad up Pad leads through Aurich. On foot : Hikers on the Ostfriesland hiking trail from Bensersiel to Rhauderfehn come through Aurich.

Activities : Experience Aurich historically :  A journey through Aurich’s history! How was it in Aurich at the time of the reigning chiefs? What was left of the former royal residence? What happened after Aurich had to relinquish its seat as a governmental and even a garrison town? The offered historical city tours and productions let you dive into the former Aurich :  Breathless through the city , Night watchman tour , From Biedermeier to Dancing Queen . Medieval city tours for children ,  Guided tours of the Historical Museum , Guided tours with the audio guide through the Historical Museum.