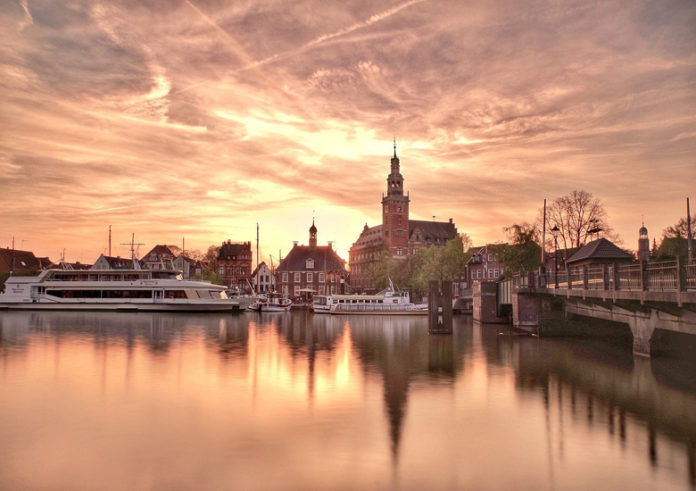 Leer is a town in the district of Leer, the northwestern part of Lower Saxony, Germany.

It is situated on the river Leda, a tributary of the river Ems, near the border with the Netherlands. It has a railway and autobahn connection to Groningen, Netherlands, Emden, Bremen and the South (Rheine and the Ruhrpott industrial region). Geography : Leer had been a settlement long before it was first mentioned in written documents.

Originally the city was situated at a meander near the mouth of the river Leda into the Ems, which is still the center of the town today. Even though Leer is some 30 km (19 mi) away from the coast, it can be reached by large ships via the Ems. Leer lies close to the Dutch border , the district of Leer shares a border with the Dutch province of Groningen.
History : There are many traces of early settlements in the area, including crude flint tools that are dated back to roughly 3200 BC.

In 791 AD Saint Ludger built the first chapel in East Frisia at the western edge of the settlement Leer, then still named Hleri after feetlot, willow. This chapel is mentioned for the first time in a written document from 850 AD. During the 14th and 15th centuries, Leer was home town of the Ukena family which was one most influential East-Frisian chieftain families of that time. The town profited from the trade with the Hanse, and a fortress Leerort was built. In 1508, Count Edzard obtained the official right to host a market, which started the tradition of the “Gallimarkt,” which is now an annual fair. In 1744 East Frisia fell to Prussia, then ruled by Frederick the Great. Town privileges were awarded in 1823 by George IV, King of Hanover.

In 1854 Leer became connected to the “Hannoversche Westbahn” railway, which at that time connected Emden and Rheine in the Ruhr area. In 1856, the Westbahn was connected to the central German railway network. Unlike Emden, Leer only suffered little damage by Allied bombing in World War II. The city was occupied by Canadian troops on April 28, 1945. On 1 October 1955, Leer received the status of an independent city.

Access : Coordinates: 53.230833, 7.452778 / By train : 1 train station. Intercity connections from Emden – Lingen (Ems) – Munster (Westf) – Oberhausen – Duisburg – Dusseldorf – Koln – Koblenz – Mainz – Mannheim – Stuttgart. There is a regional train from Groningen in the Netherlands. By car : Exit off the A 28 Bremen – Oldenburg – Leer and the A 31 Emden – Leer – Bottrop. By plane : 2 Flugplatz Leer-Papenburg. A small general aviation airfield which provides air taxi services to the East Frisian Islands.

Go next : Take the boat to Helgoland / Emden / Oldenburg / Aurich /
Oldambt — the region just across the border in the Netherlands, including ‘windmill city’ Winschoten