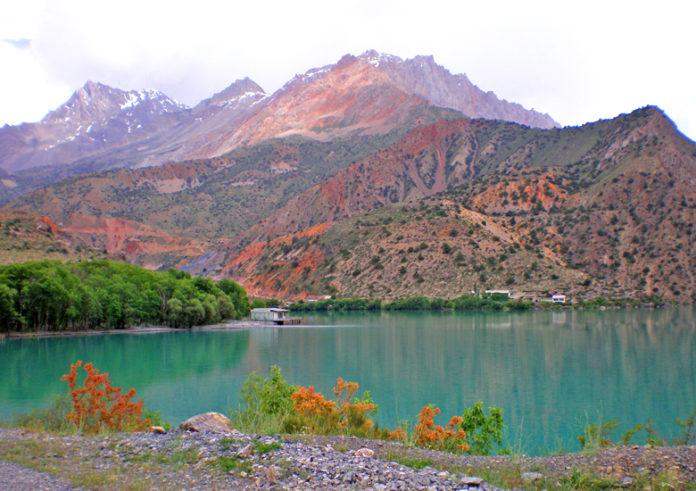 Lake Iskanderkul – the largest lake in the Fan Mountains, located at an altitude of 2068 m above sea level. The lake has the shape of an irregular triangle with rounded corners. The area of 3.5 square meters. km, maximum depth of 72.0 m.
According to one legend, during the campaign against Sogdiana and Bactria, the Greek conqueror Alexander the Great  met the resistance of a single mountain village, which decidedly did not want to submit to the great conqueror. And then Alexander ordered to change the river beds in order to flood the recalcitrant, and thus Lake Iskanderkul was formed.
Also near Iskanderkul there is a complex of the meteorological station of the meteorological center of Tajikistan and a point for hydrological observations.

Local Legend :
There is also an interesting legend about the cave of the Greek conqueror Alexander the Great . According to legends, Alexander stayed in this place. It is also believed that Alexander’s favorite horse, Bucephalus or Bucephalas – Ancient Greek: Βουκεφάλας, -drowned in the Iskanderkul waters. The great commander was angry with his grooms and left them right on the coast. Since then, every month, during the full moon, the waters of the lake part, and from there comes a snow-white horse, accompanied by grooms.

Unfortunately, that cave collapsed. The only thing we could see inside was a thick layer of stones and dust, in some places.

Access : Coordinates: 39.0725, 68.366389 / The Iskanderkul  located 160 km from Dushanbe and 22 km from the Dushanbe-Khujand automobile road, on the Iskanderkul district of Ayni district, The 25 km highway of this road is difficult. By train :
International train connections exist from Dushanbe via Tashkent and the Trans-Caspian railway to Moscow. However, the route from Dushanbe passes through the territory of Uzbekistan, Turkmenistan, Uzbekistan and Kazakhstan, so you must obtain visas in advance for all these states. The train journey Berlin-Dushanbe takes more than 5 days. / By plane :
Somon Air currently operates a direct weekly flight from Frankfurt to Dushanbe. Turkish Airlines via Istanbul and Aeroflot via Moscow offer further connections (both several times a week). The Russian S7 flies comparatively favorably in 2019, with a switch from Moscow-DME to Kuchand (IATA: LBD). possible to reach it for free through hitchhiking ( Crazy Kamaz truck ride ) and hiking ,the numerous shared taxis (Marschrutka) or on rented vehicles with driver. Be aware that the drivers will most likely not speak English, so a working knowledge of Russian or Tajik is advisable.