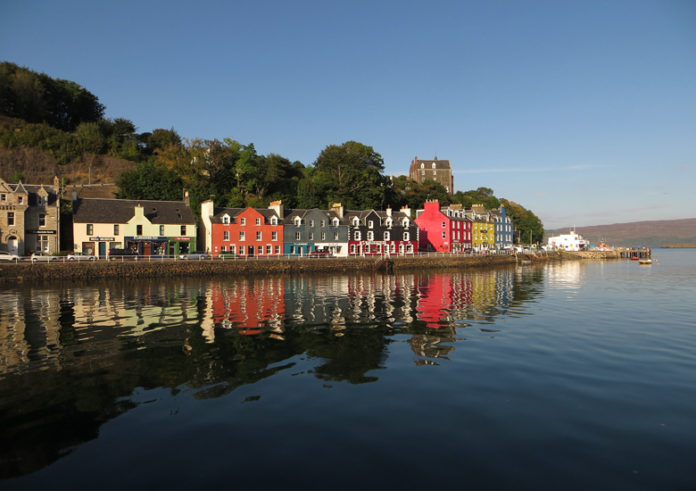 Tobermory  is the capital of Mull, and until 1973 the only burgh on, the Isle of Mull in the Scottish Inner Hebrides – United Kingdom.

It is located on the east coast of Mishnish, the most northerly part of the island, near the northern entrance of the Sound of Mull. With a current population of approximately 1000, the town was founded as a fishing port in 1788, its layout based on the designs of Dumfriesshire engineer Thomas Telford.

History :  Legend has it that the wreck of a Spanish galleon, laden with gold, lies somewhere in the mud at the bottom of Tobermory Bay—although the ship’s true identity, and cargo, are in dispute. By some accounts, the Florencia (or Florida, or San Francisco), a member of the defeated Spanish Armada fleeing the English fleet in 1588, anchored in Tobermory to take on provisions. Following a dispute over payment (or possibly, according to local folklore, a spell cast by the witch Doideag),

the ship caught fire and the gunpowder magazine exploded, sinking the vessel. In her hold, reputedly, was 300,000 GBP worth of gold bullion. Other sources claim the vessel was the San Juan de Sicilia (or San Juan de Baptista), which, records indicate, carried troops, not treasure. Whatever the true story, no significant treasure has ever been recovered in Tobermory Bay. The largest attempt made to locate the galleon was in 1950 when the then Duke of Argyll signed a contract with the British Admiralty to locate the galleon.

Nothing came of the attempt, apart from the development of equipment still used today to locate ancient sunk vessels. Owing to similarities in sailing conditions, in the mid-1800s emigrant sailors created the community of Tobermory, located in Ontario, Canada. This namesake town has twin harbours, known locally as “Big Tub” and “Little Tub”, which sheltered ships from the severe storms of Lake Huron.

During the Second World War, Tobermory was home to Royal Navy training base HMS Western Isles, under the command of the legendary Vice-Admiral Sir Gilbert Stephenson, the so-called “Terror of Tobermory”. His biography was written by broadcaster Richard Baker, who trained under him.

Get around : The village can readily be explored on foot, but note that there is a steep hill between the main street and the majority of houses and the Western Isles Hotel.