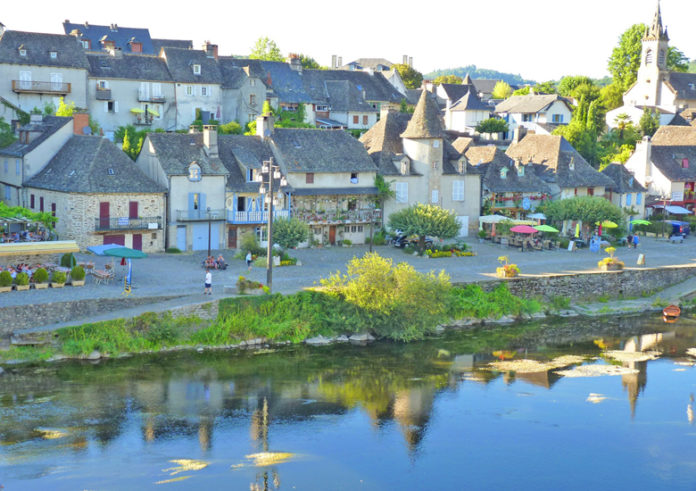 Argentat is a former commune in the Correze department in the Nouvelle-Aquitaine region of central France.

On 1 January 2017, it was merged into the new commune Argentat-sur-Dordogne   History : Argentat lies on the border of three regions, Limousin, Midi-Pyrenees and Auvergne, although it officially lies within the Nouvelle-Aquitaine region. It also lies on the Dordogne river below some deep gorges with tumultuous water. This location makes the town of some importance due to the bridges crossing the Dordogne and the important river traffic to Bergerac and Libourne. Since Gallic times a village perched on a nearby hill, the Puy-du-Tour, has controlled the ford on a protohistoric way connecting Armorica to the Mediterranean. A Roman villa was established on the plain of Longour, a farming-oriented area, close to the Dordogne.

From the 10th century Argentat is known to have had a priory and a priest in a walled city. The town depended on a religious lord, the Prior of Carennac, and a lay lord, the Viscount of Turenne. Guarding his rights the Viscounty did not grant any charter of liberties and the local community had to be content until, in 1615, parish trustees were appointed to manage it. However, from 1263, the Turennes conceded an important market on the Saint Andrew’s day to the town which is the oldest fair in Lower Limousin. Argentat sided with the Huguenots in the Wars of religion which created a troubled situation for half a century. In the 17th century, with the Counter-Reformation and the subsequent establishment of the Recollects and the Poor Clares around 1633 and the Ursulines in 1637, the struggles gradually subsided. With the annexation of Viscounty to the Crown in 1738, Argentat became the seat of a sub-delegation of the management of Limoges.

The town experienced significant economic growth in the 18th and 19th centuries from Inland navigation by scows, which were known locally as courpet, that allowed the delivery of goods (mainly oak staves for cooperage and carassonne-stakes for grapevines) to the Bordeaux region. This activity began to decline at the end of the 19th century following the outbreak of phylloxera, which devastated the vineyards, and the inauguration of the PO Correze railway between Tulle and Argentat in 1904 (this line remained in operation until 1970).

Limousin region  travel information: Access by rail from Paris Gare d’Austerlitz  there are regular Intercites trains from Paris to Limoges and Brive la Gaillarde, with connecting services to other towns. There are also a few cross-country services from Clermont-Ferrand via Ussel and Brive to Bordeaux.
Road access to Limousin: the region is crossed north-south by the A20 motorway (Paris – Orleans – Vierzon – Toulouse), and northeast-southwest by the A89 motorway (Lyon – Clermont-Ferrand – Brive – Bordeaux) . Regional airport: Limoges airmort is served by several low cost airlines from the UK and Belgium. There are also some services to the new Brive airport. Coordinates:45.0942, 1.9386