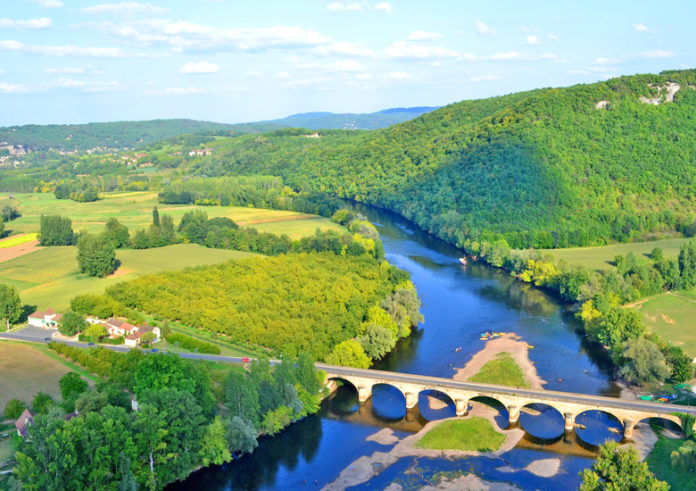 Dordogne  is a department in southwestern France, with its prefecture in Perigueux. The department is located in the region of Nouvelle-Aquitaine between the Loire Valley and the Pyrenees, and is named after the Dordogne river that runs through it. It corresponds roughly with the ancient county of Perigord.

Geography : The department is part of the region of Nouvelle-Aquitaine and is surrounded by the six departements of Haute-Vienne, Correze, Lot, Lot-et-Garonne, Gironde, and Charente. Dordogne is the third-largest department of metropolitan France.

Tourism : the Dordogne has some very popular areas : argentat   Perigueux itself  the city has a beautiful historic centre, around its ancient Cathedrale Saint Front, one of the oldest in France (though rebuilt in the 19th century).

The caves and prehistory area of the Vezere valley between Montignac, Lascaux and Les Eyzies , The “mediaeval” city of Sarlat and the Dordogne valley itself, between Le Buillon and Aillac, an area including several of the finest of the Dordogne castles. There are more than 1,500 castles in Dordogne, making it “The Other Chateau Country”   including: Beynac ,  Biron ,  Bourdeilles ,  Castelnaud-la-Chapelle ,  Commarque ,  Hautefort ,  Jaurias ,  La Besse ,  La Mothe ,  La Petite Filolie ,  La    Renaudie ,  La Roche ,  La Roque ,  Milandes  ,  Monbazillac ,  Pecany , Puymartin .
The famous caves of Lascaux have been closed to the public, but a replica of Lascaux II is open to visitors and is a major tourist attraction. Perigueux has important Roman ruins, including an arena which is still visible inside a public park located near the town centre.

activities : Canoeing down the River Dordogne is a fantastic way to see the region. It is also great for seeing towns and castles. Small group tours departing from Sarlat la Caneda with Ophorus. The Dordogne is a wonderful area for walking and hiking. There are various good maps of the region or otherwise quite a few local, independent walking holiday providers can help you on your way. In the region there is some amazing caves.