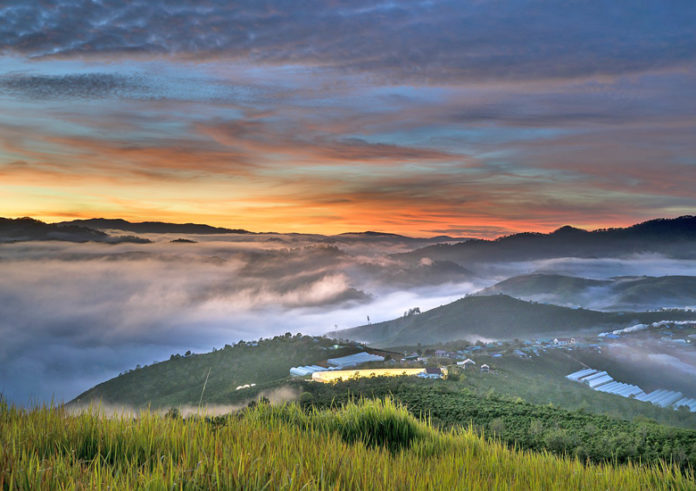 Dalat , is the capital of Lam Dong Province in Vietnam. The city is located 1,500 m (4,900 ft) above sea level on the Langbian Plateau in the southern parts of the Central Highlands region. In Vietnam, Da Lat is a popular tourist destination.

Da Lat’s specific sights are pine wood (forming the name: “City of thousands of pine trees”) with twisting roads and tree marigold (Vietnamese: da qu?) blossom in the winter. The city’s temperate weather stands in contrast to Vietnam’s otherwise tropical climate. Mist covering the valleys almost year-round leads to its name “City of Eternal Spring”. Da Lat is also known as an area for scientific research in the fields of biotechnology and nuclear physics. With its year-round cool weather, Da Lat supplies temperate agriculture products for all over Vietnam, for example: cabbage and cauliflower. Its flower industry produces two typical flowers: hydrangea  and golden everlasting . The confectionery industry offers a wide range of mut, a kind of fruit preserve that closely resembles varenie, made from strawberry, mulberry, sweet potato, and/or rose.

Architecture : The architecture of Da Lat is dominated by the style of the French colonial period. Da Lat Railway Station, built in 1938, was designed in the Art Deco architectural style by French architects Moncet and Reveron, although it incorporates the high, pointed roofs characteristic of the Cao Nguyen communal buildings of Vietnam’s Central Highlands. The three gables represent an art deco version of Normandy’s Trouville-Deauville Station. The station’s unique design—with its roofs, arching ceiling, and coloured glass windows—earned it recognition as a national historical monument in 2001. They designed the Lycee Yersin, which opened in 1927. The Dominion of Mary Church and Convent, home to Roman Catholic nuns of the Mission of Charity, were built in 1938 with a similar pointed-roof style.

Hang Nga guesthouse is decorated with twisting organic forms. Of particular note is the unconventional architecture of the Hang Nga guesthouse, popularly known as the “Crazy House”. Described as a “fairy tale house”, its overall design resembles a giant banyan tree, incorporating sculptured design elements representing natural forms such as animals, mushrooms, spider webs and caves. Its architecture, consisting of complex, organic, non-rectilinear shapes, has been described as expressionist.

Its creator, Vietnamese architect Dang Viet Nga (also known as Hang Nga), who holds a PhD in architecture from Moscow State University, has acknowledged the inspiration of Catalan Spanish architect Antoni Gaudi in the building’s design. Visitors have variously drawn parallels between the guesthouse and the works of artists such as Salvador Dali and Walt Disney. Since its opening in 1990, the building has gained recognition for its unique architecture, having been highlighted in numerous guidebooks and listed as one of the world’s ten most “bizarre” buildings in the Chinese People’s Daily. While superficially amusing, the compound is let down by the construction debris and household refuse behind the facades, and the lack of attention to safety issues.