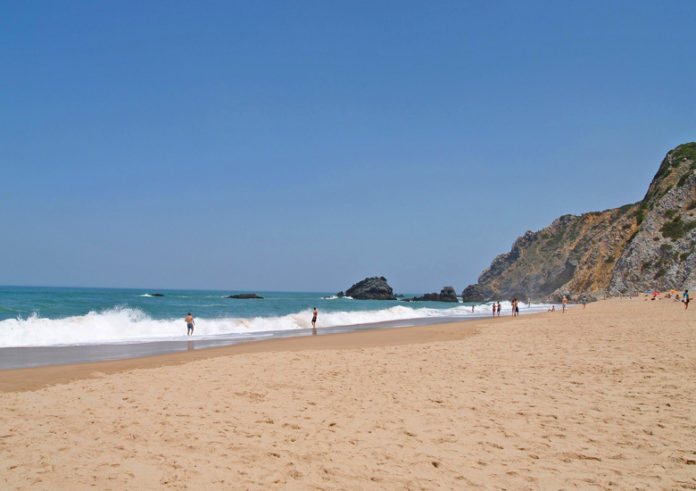 Praia da Adraga in  Portugal , is one of the most famous beaches in the Sintra-Cascais region.

mainly due to the stunning scenery of cliffs, jagged rock out crops and golden sand. This opinion was confirmed by a poll conducted by a British national newspaper that rated Praia de Adraga as one of Europe’s top 20 beaches. This view might be slightly overrated if you visit during the summer weekends when the beach is busy and the car park is rammed but no one can dispute that Praia de Adraga is a beautiful beach.

Praia da Adraga is 18km north of Cascais and 13km west from Sintra. Due to the semi-remoteness of the beach there is virtually no public transport, so visitors will need the use of a rental car to reach Adraga beach. From Cascais the most pleasant route is along the N247 which follows the coastline and passes the beach of Guincho. At the town of Almocageme turn left and follow this road for a further 2km, the beach is well signed. At the beach there is cafe, restaurant and public toilets. The major issue with the beach is the very limited parking which at the height of the season can be a pain to park. This beach is best visited during the week. If Praia da Adraga is too busy for you liking head south along the N247 to Praia do Guincho. The northern part of the beach is attended by nudists

There is a restaurant , public showers and toilets , parking  and the beach is watched by lifeguards during the summer season (June to mid-September).
The taxi is a good idea! The beach is a 20+ minute walk down from Almocegem and a slightly longer seeming walk up the hill to return to the bus stop to Sintra or Cascais. It would be fine to go after a day of Sintra sightseeing for an evening meal or picnic, and sunset. The restaurant right on the beach is very good for seafood.

You can get Bus 403 from Sintra or Cascais as it connects the two places to Almocegem. Have a lovely time!!