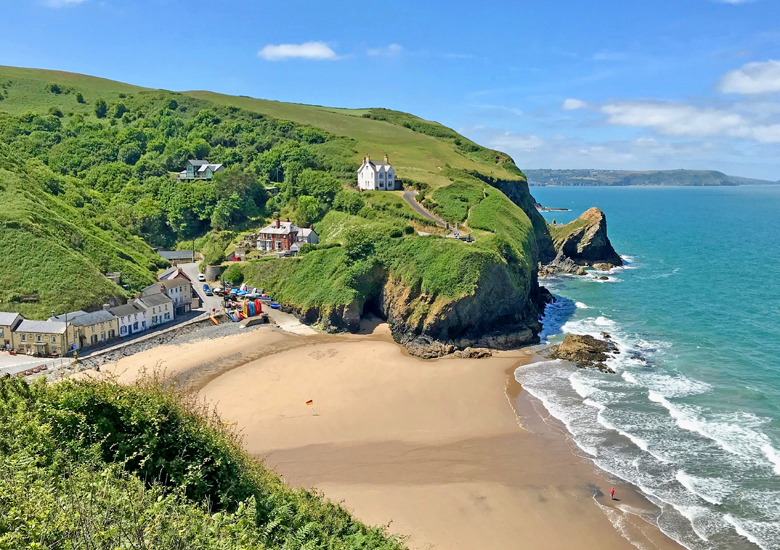 Llangrannog (formerly Llangranog) is a small coastal village and seaside resort in Ceredigion, West Wales,United Kingdom.  between Aberporth and New Quay. The village lies in the narrow valley of the small river Hawen, which falls like a waterfall near the center of the village. The village economy is now dominated by seaside tourism.

local legend:
According to legend Carreg Bica (Bica’s rock), a large sea-weathered pile of Ordovician rock on the beach, is the tooth of the giant Bica who lived in the Ceredigion neighborhood, and was forced to spit his tooth on the beach after a bad toothache In Some versions of the Bica story are romanised as Neptune.

Activities : sightseeing / photo opportunities / hiking in the part of the Wales Coast Path – Aberporth to Llangrannog , Penbryn to Llangrannog / Cycle / Bathing / Surf / Urdd camps : Thousands of Welsh children have enjoyed holidays at the Urdd camps. The Llangrannog camp includes a heritage center, a dry ski slope, and a riding center – all open to visitors. 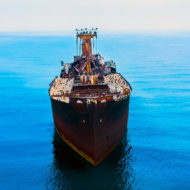 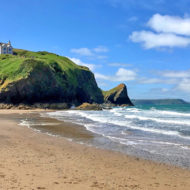