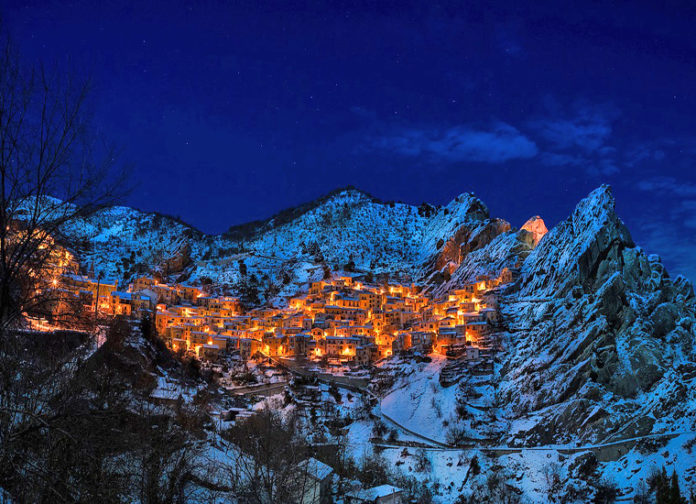 Castelmezzano is a town and comune in the province of Potenza, in the Southern Italian region of Basilicata. It is part of the club The most beautiful villages in Italy.

History :The origins of Castelmezzano date to approximately between the 6th and 5th centuries BC, when Greek settlers got into the valley of Basento and founded a town called Maudoro, meaning roughly the world of gold. In the 10th century AD, the Saracen invasions forced the local population to find a new location. It is said that during the exodus, a pastor called Paolino discovered a place to move, formed by rocks from the steep peaks which could repel the invaders by means of rolling stone boulders on to the invaders.

After occupation by the Lombards, the Normans settled there between the 11th and 13th century AD and built a castle (the remains of which the walls and tier of rocks allowed access to the higher lookout point are still visible). It was from the name of the castle (Castrum Medianum, roughly means Castle in the Middle) that the town derived its name, the castle so named because of its position between those of Pietrapertosa and Albano di Lucania. With the Normans, Castelmezzano experienced a period of peace and development, until the Angevins experienced a sharp decline. In 1310, the municipality was entrusted to the Diocese of Potenza (PZ) and in 1324 to that of Acerenza.

With the arrival of the Crown of Aragon, between the 14th and 16th century, many landowners received Castelmezzano as feudo, although the economic and social conditions remained mostly unchanged. Only with the appointment of Baron Giovanni Antonio De Leonardis (whose family governed the town from 1580 to 1686), did development take place. Subsequently, it passed by marriage to the De Lerma, who remained until 1805, when feudalism was on the verge of extinction in southern Italy.

In the 19th century, Castelmezzano was affected by brigandage. Due to its location, rich in natural hiding places among the rocks and lush vegetation, it was an ideal refuge for many bandits. At the end of the century, the town suffered a major migratory exodus, which prompted many families to move overseas.