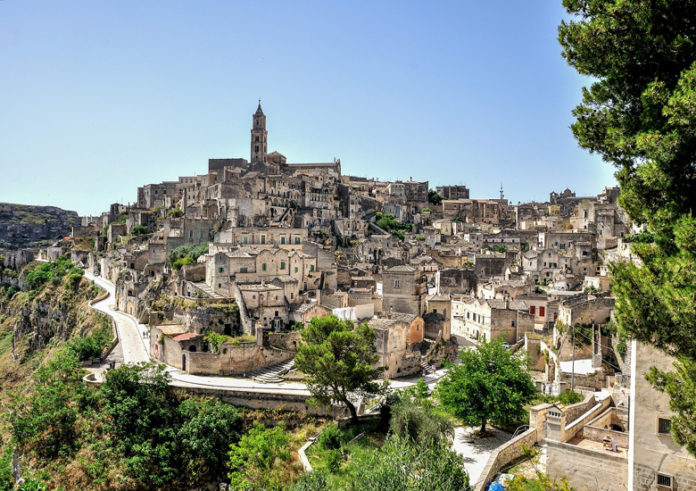 Matera is the capital of the Matera province in the Basilicata region of Italy. It boasts the sassi: well-preserved rock-cut settlements that are a World Heritage site and one of Southern Italy’s many important attractions.

Understand : Matera is a fairly big city of around 60,000 people. One of its quarters is the old city. Just outside the old city are the Sassi – cave houses dug into the limestone rocks. The sassi are located on both sides of a valley. On the north side the Sasso Barisano have been partially commercially developed as offices and housing. The Sasso Caveoso, on the south side, is the most historically interesting.

Matera is a “European Capital of Culture” for 2019, an honour it shares with Plovdiv. Be prepared for huge tour groups clogging up the narrow alleys and stairways in the old town, especially on Sundays and holidays.

Access : Coordinates:40.666667, 16.6 / Matera is most easily reached from Bari in the Apulia region. The Ferrovie Appulo Lucane (FAL) runs trains from Bari to 1 Matera Centrale, taking 1 hr 30 min with departures every 1-2 hr during the daytime. The FAL train station in Bari is located just outside of Bari Centrale and is toward the left as you walk out onto the large piazza with the buses and fountain. The FAL does not run trains on Sunday, and does not accept rail passes. Tickets are approximately €5 each way  be sure to stamp your ticket with the machines before boarding. There is a direct bus connection to Bari Airport with Pugliairbus (1 h 15 min, tickets from € 3)

Get around : After exiting Matera Centrale, there is a piazza to the left with various buses. From here, “Linea Sassi” buses to I Sassi di Matera every 30 min  the inexpensive tickets are sold upon boarding. The Sassi can also be reached on foot in about 20 minutes by walking straight ahead downhill from the piazza. The Sassi themselves can only be explored on foot, and tourist information is available locally.

Activities : Hike in the hills around Matera. For example walk down from the north east of the city, cross the ravine and hike back up the hill to the 1 Belvedere di Murgia Timone for a view of the city from the other side.
The Women’s Fiction Festival is held late every September in the Sassi District, and attracts an international contingent of writers, agents and editors.
Guided tours. Mon-Sun 9AM-6PM. Join a guided tour with a private guide or in a group
Ape nei Sassi (Ape tour Matera), Via Casalnuovo 329. Panoramic tour with Ape car. €15-25