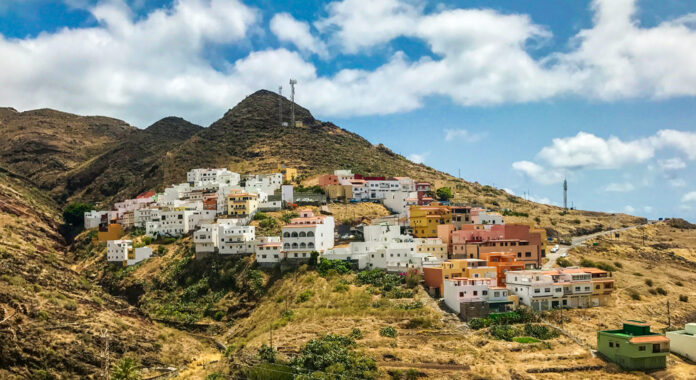 Taganana  is a small mountain village located in  Santa Cruz de Tenerife, on the island of Tenerife — Canarias, Spain.
Taganana is a fishing village in the southern part of Anaga Rural Park, 24 km from the island capital. This is one of the oldest settlements on the island, founded by the conquistadors in 1501. Since 1813 Taganana has become a separate municipality.
Small white houses, built in the traditional style of Tenerife, are scattered over emerald slopes among ancient laurel forests.The village name Taganana comes from the Guanche language. There is the church of Our Lady of the Snows, whose patron saint’s feast day is August 5th. According to the story, the image of the maiden was found at the beach, abandoned by a ship.
The area of ​​the town is included in the Anaga Rural Park and like the other towns and hamlets of Anaga, Taganana is also included in the Macizo de Anaga Biosphere Reserve declared as such by UNESCO in 2015.

Access : Coordinates: 28.561667, -16.218333 / The Taganana can only be reached by vehicle via the TF-134 road, which descends with a gradient of up to 16% from the heights of the mountains to the sea shore. It can be reached via the TF-12 either from La Laguna or from Santa Cruz via San Andrés. / Public transport : From the capital of Tenerife there is a bus 946 of the titsa company that runs to Taganana village.

Activities : sightseeing / photo opportunities / Through Taganana, there is a network of hiking trails in the surrounding area. / Taganana is famous for its family-run fish restaurants.

Go next : visit the famous beach of Las Teresitas / San Cristóbal de La Laguna , the colonial capital of Tenerife with a historic centre that is a UNESCO World Heritage site.