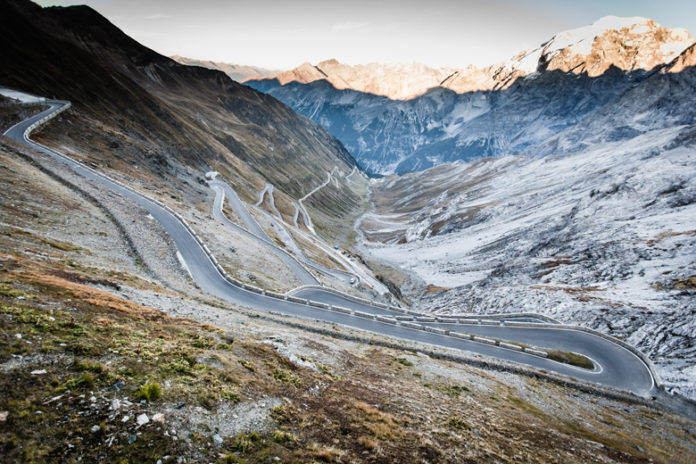 The Stelvio Pass or Passo Dello Stelvio   is one of the most spectacular roads in the world. Its 48 – horseshoe curves – and its alpine landscape make this alpine colossus a place of pilgrimage for cyclists and road lovers .Located at 2758 m asl and links Lombardy to Switzerland and the South Tyrol, The   Pass is in the Italian Alps of northern Italy. It’s 200 km northeast of Milan and 350m northwest of Venice.

The official name of the Stelvio Pass road is the SS38 and it connects Prato allo Stelvio (in the South Tyrol, northeast of the Pass) with Bormio (in the Sondrio region, southwest of the Pass). / only during the summer season) 2,757 above sea level, and the second highest in the Alps, 13 m (43 ft) below France’s Col de l’Iseran (2,770 m . The pass is among the 25 highest passes in Europe.

The route that makes up the Stelvio Pass exists since the middle ages, although it was one of the  most dangerous mountain roads . At the beginning of the 19th century, the emperor of the Austrian Empire Francisco I of Austria wanted a new road that connected the Venosta Valley (near the borders of Austria and Switzerland) to the Valtelina (north of Lombardy), and from there to Milan, which at that time was Austrian territory.
The new highway was inaugurated in the presence of the emperor himself.

The area around the pass has been forming the Stelvio National Park since 1935.In a 2015 study decided to clarify whether a future railway or car tunnel under the Stelvio Pass is feasible. In addition, it is planned to get the Stelvio Pass recognized as a UNESCO World Heritage Site.
Its characteristics make this route to the port not only a paradise for car drivers, but also for motorcyclists and, above all, cyclists, who have in the surroundings of Bormio other ascents such as Passo del Mortirollo or Paso Gavia , among the most demanding, but also climbs such as Foscagno, Bormio 2000 or Cancano.

Points of Interest:
– the views : Piz da las Trais Linguas -the peak of three languages- summit is the tri-point where the Italian, German and Romansch languages meet.
– Forte Venini di Oga, WWI Fort : The fort of Oga is located at 1,730 meters of altitude, in a place identified with the place name Dossaccio.from SS 38 “Stelvio”, coming from Tirano: detour of Bormio (<5 km) In addition to the fortress and the museum, the view of the valley is great.
– Albergo e Ristorante Tibet Hutte , Accommodation in comfortable rooms at reasonable prices. It is very good at night when resting on the pass.
–

– The Stelvio route is an unforgettable alpine summer adventure ,an Iconic Pass with Epic Views , The “Queen of the Alpine roads” ,considered one of the most impressive roads in the world, and one of the most popular routes for cyclists and motorcyclists. Every year in late summer,
– Cycling : There are three cycle routes to the Stelvio Pass: the South Tyrolean side, from Prato allo Stelvio, the Lombardia side from Bormio and the Swiss side from Santa Maria (in Val Monastero) over the Umbrail Pass.
– Ski : During the summer the glacier offers a 5-kilometer cross-country ski circuit, between 15 and 20 kilometers of slopes for alpine skiing (which can vary according to snow conditions), 6 ski lifts and an elevation gain of 650 meters,
since its elevation high reaches 3,450 meters and the low level at 2,760. / The Passo Stelvio glacier is also known as the Stilfser Joch. It has the appeal of being the most extensive summer ski area in the Italian Alps and is much in demand for training of national teams from half of Europe.

– Driving in the Stelvio Pass is difficult due to the no less than 48 forks that make up the climb and very narrow sections. This road is, without a doubt, one of the most spectacular on which you can drive in the world.
– Stelvio National Park , The port is located within the Stelvio National Park, the largest national park in Italy, with more than 130,000 hectares. If you have in mind traveling to Italy and what you like is nature, forests, glaciers, waterfalls and mountains, do not hesitate to visit this place.
– the Giro d’Italia : The famous cycle race Giro d’Italia often leads over the Stelvio Pass. At the top of the pass, a monument commemorates the legendary Italian cyclist Fausto Coppi, who won the Giro d’Italia five times.
– marathon : On 17 June 2017, a marathon took place for the first time on the Stelvio Pass, which has since then been held annually in June. The route leads over 42.195 km from Prad am Stilfserjoch on the Furkelhutte up to the pass
– Top Gear : the British automotive tv show ”Top Gear”   In the first episode of the tenth season , the road to the Stelvio Pass was portrayed as “the world’s greatest driving road”, the “most magnificent driveway in the world”. For the shooting heavily motorized, weight-optimized sports cars were used by Porsche, Lamborghini and Aston Martin with street legal, the route was closed to traffic, and helicopters were used.
– The Liege-Brescia-Liege Rally, a rally for cars with engines under 500cc , the cars needed to cover more than 3.000 kilometers, driving through some of the biggest European passages, They drove through the Gavia Pass, Stelvio Pass, through some villages in Austria, the German autobahn and finally arrived to Spa.
– Alpine Rally – Coupe des Alpes : was a Legendary  rally competition based in Marseille and held from 1932 to 1971. Their first event after ww2 was in 1947 and it gradually grew into one of the three biggest and most important rallies in Europe. Its route, which reaches the figures of 3000 and 4000 km, was mainly through the Alps mountain range visiting countries. Was an automotive adventure through all the famous passes  like Stelvio Pass of France, Italy, Austria, Germany and Switzerland.
– Motorcycle Touring : The Alpine Loop, including Stelvio – Passo do Stelvio Pass considered and is one of Stelvio Top 10 best motorcycle routes in Europe

Access : Coordinates: 46.528611, 10.452778 / The Stelvio Pass usually opens in the second half of May and closes at the start of November.
– The climb from Prato allo Stelvio.
The South Tyrol ascent is the hardest climb. The starting point is Prato allo Stelvio (918 m asl) and the climb is 25 km long, with an ever increasing gradient in the slopes.
– The climb from Bormio , The ascent from the Lombardia side begins in Bormio 1,225 m.asl and is 21 km long.

– The climb from Santa Maria over the Umbrail Pass
The third ascent to the Stelvio Pass is for the most part in Switzerland and on Swiss roads. The starting point is in Santa Maria 1375 m asl in the Val Monastero, part of the Grison Federation, and is about 16 km long.
Bus : There are also regular buses on Stilfserjochstrasse. The Mustair-Tirano Swiss Post Bus Line, operated once a day during the summer months, leads from Mustair and Santa Maria Val Mustair to the Umbrail Pass and the Stilfser Joch. From there, the line continues to Bormio and Tirano.
There is a scheduled bus operated by Automobilistica Perego that travels twice a week from Bormio and from Trafoi to the ski resort./ , Bus route , Mustair–Sta. Maria–Stelvio–Bormio–Tirano /

Infrastructure on the pass : In addition to several hotels, cafes and kiosks, the pass also boasts one of the highest chapels in the Alps and a branch of the Banca Popolare di Sondrio, which claims to have the highest bank counter in Europe. There are also regular buses on Stilfserjochstrasse 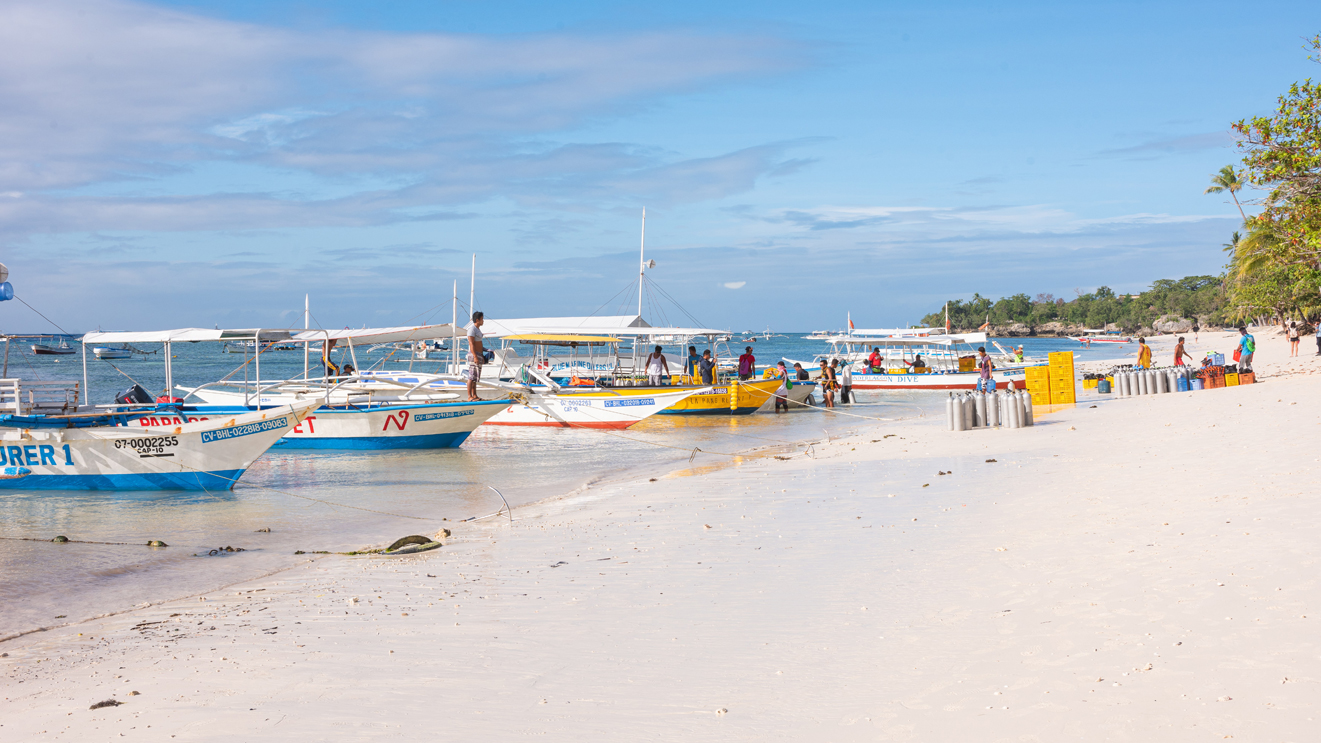