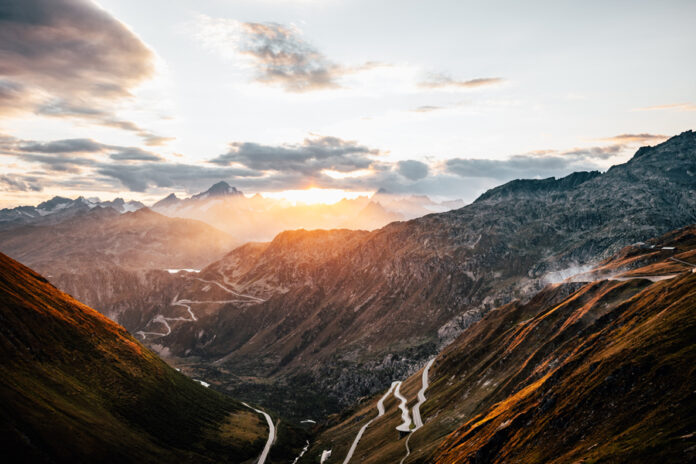 The Furka Pass is a mountain pass , located in the central area of the Swiss Alps Switzerland. Its height is 2,436 meters above sea level. It connects the Urzerenthal valleys in the upper Reuss, the Uri canton and the Rhone valleys, the Wallis canton. The nearest settlements are Glech (from the west, in the canton of Valais) and Realp (from the east, in the canton of Uri).
The pass has been used since ancient times, but appears in historical sources with its modern name around 1200. Since the fourteenth century it has gained great importance as a link between Switzerland and the Duchy of Savoy. It is known that in 1779 it was crossed by Johann Wolfgang Goethe with three companions.

Until 1981 it was overcome not only by the carriage road, but also by the railway, which overcame the obstacle at an altitude of 2,100 m with a rack and a short tunnel. In 1981, a railway tunnel was opened linking Realp (Canton Uri) to Oberwald (Canton Valais). This connection allows, with the use of shuttle trains, to quickly transport the cars between the two valleys even in winter. Under the pass passes the famous Glacier Express, a train that connects Zermatt with Sankt Moritz.
The pass road is part of the main road 19. In the western valley town of Gletsch, the road branches off to the Grimsel pass.
The road through this pass is one of the most iconic, exciting and thrilling in the Swiss Alps. The pass gained its fame after the car chase in the Aston DB5 / Ford Mustang in the James Bond film Goldfinger.This road is considered one of the most dangerous and difficult roads in the world.
Fourka is considered one of the most beautiful passages in the world. More than 250,000 people cross the Furka Pass every year. Many tourists are advised to stay at the famous Belvedere Hotel on the Rhone Glacier, which offers indescribable mountain views.

Note : The Furka Pass is open from early June to mid-October. The dates can be shifted depending on weather conditions./ The pass road is quite narrow and therefore only small vehicles drive, especially no trucks.

Activities : sightseeing / photo opportunities / trekking / scenic bike tour, xtremely impressive bike tour from Andermatt to the top of the Furka Pass and on to the Rhone Glacier.

Go next : Andermatt is a village, ski resort in central Switzerland / Gletsch is a village in the German-speaking half of the Valais, located in the upper Rhone valley called Obergoms, 2.5 kilometers southeast of the mouth of the Rhone glacier / Hospental is a village in Switzerland, in the canton of Uri.