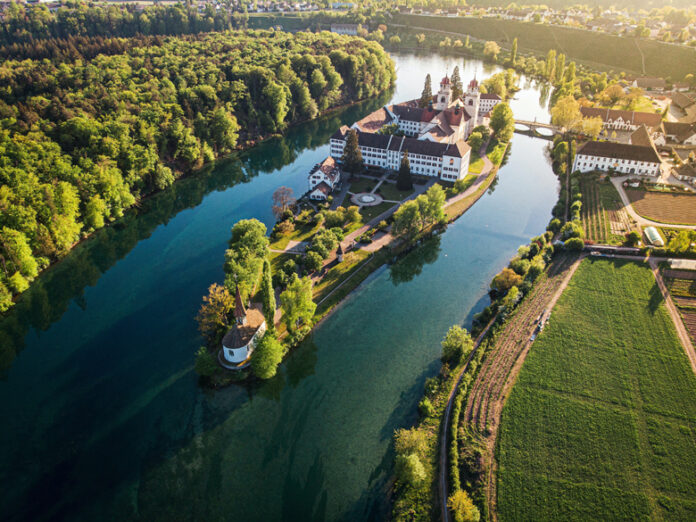 the island of Rheinau ,is one of the river islands of the The Rhine river out of 6 total. located in the Canton of Zurich, Switzerland.
The island of Rheinau located on a strategically sheltered  bend of the Rhine River which forms the Swiss-German border in this area , A bridge links Rheinau to Altenburg, in Jestetten municipality, Baden-Württemberg state.
More than a thousand years ago, the Rhine Island was chosen as the well-protected site of a monastery.a Benedictine abbey emerged in the 8th century. After its abolition in 1862, the facility was used as a psychiatric clinic from 1867 to 2000. Since 1998, the buildings on the peninsula have been rented to the Fintan Foundation. They are registered as Swiss cultural property of national importance.

The various buildings in the listed complex, which is owned by the Canton of Zurich, are currently being used for new purposes. The “Musikinsel Rheinau”, the home economics school, the restaurant “Klostergarten” and the “Haus der Stille” are already in operation. The museum is created in close cooperation with the cantonal authorities.

Access : Coordinates: 47.642222, 8.608333 / You can get to the Rheinau monastery by car from Zurich , On the A4 from Schaffhausen or Winterthur, take exit 8 Rheinau-Marthalen and drive to Rheinau. / Parking lot in front of the Rheinau municipal office , A small bridge leads to the monastery island. / Boat tours to the island with the abbey are conducted from the Rhine Falls. Bus 620 runs regularly from Martalen to Rheinau.

Activities : sightseeing / photo opportunities / On the north shore of the island you can walk to a chapel on the eastern tip of the island ./ Guided tour for groups with reservation

Go next : The small town of Rheinau is located on the peninsula of the same name.  A visit to the medieval village is also absolutely worthwhile. /  the famous Rhine Falls.