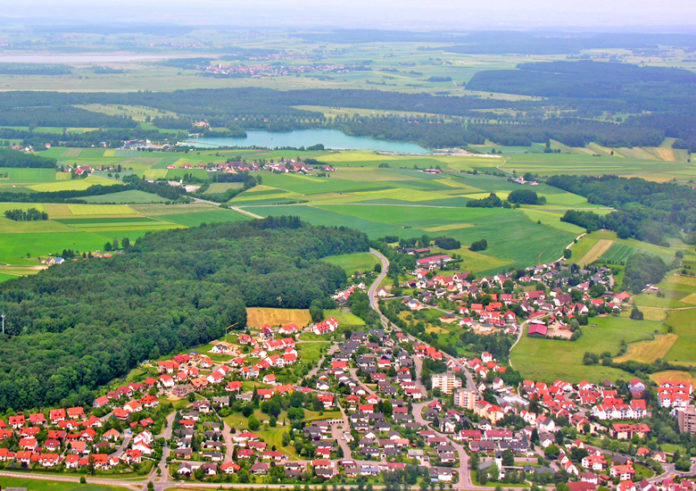 Bad Schussenried  is a spa town in Upper Swabia in the district of Biberach, Baden-Wurttemberg, Germany.

It lies on the Upper Swabian Baroque Route and the Swabian Spa Route. Schussenried Abbey, a former monastery founded in 1183, is located in Bad Schussenried. Its church and Baroque library feature impressive architecture and artwork, including intricate ceiling frescoes. The town is also home to a beer stein museum, the Schussenrieder Bierkrug Museum. Bad Schussenried had a population of 8,537 at the end of 2015

Geography : Bad Schussenried is located between Ulm and Lake Constance on the river Schussen. The 48th parallel north runs through Bad Schussenried  History : Archaeological finds provided evidence of a prehistoric settlement in the region. In 1866, a Paleolithic campsite of hunters and gatherers was discovered. These were the first Paleolithic finds in Central Europe. World heritage site :  At Aichbuhl, about 1.5 km north of the Schussen source, excavations at the end of the 19th century in the bog of Federsee discovered Neolithic pile-dwelling (or stilt house) settlements that are part of the Prehistoric Pile dwellings around the Alps UNESCO World Heritage Site

Middle Ages :  Shuozenried was first mentioned in records in 1153. The history of the city is closely linked to that of Schussenried Abbey. In 1183, the local lords Konrad and Beringer founded the Premonstratensians monastery. The abbey received many privileges, for example in 1521 the High Jurisdiction (blood court), allowing it to depict the sword next to the crozier in the coat of arms. Until the secularization, the canons governed the monastic community.

Activities : Go to the “Kurpark”. Swim in the “Zellersee Naturfreibad” or “Olzreuter See”.
Learn German on the Humboldt Institut.