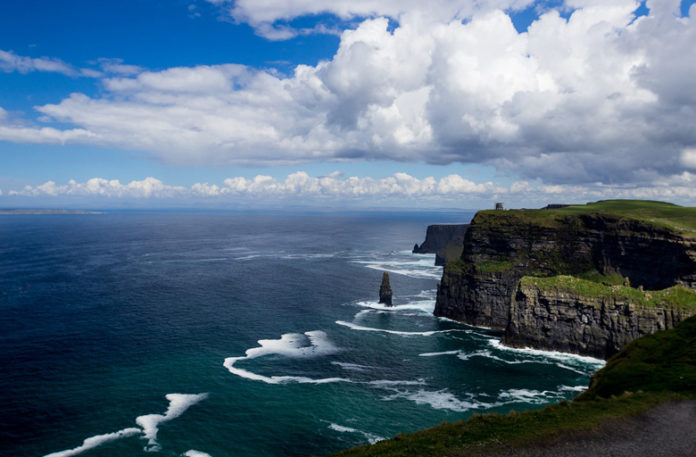 The Cliffs of Moher, are in the south-western limit of the region of The Burren, area also famous for its castles, caves and a rich Celtic history, near the village of Doolin, in the county of Clare of the Republic of Ireland. The cliffs of Moher take their name from the ruins of the fort “Mothar”, which was demolished during the Napoleonic wars to give rise to a signal tower. The O’Brien tower.

The cliffs rise 120 m above the Atlantic Ocean at the point called Hag’s Head and extend for 8 kilometers to reach a height of 214 m. From the top of the watchtower of the Tower you can see the Aran Islands and Galway Bay, and in the background the Maumturk Mountains in Connemara. The cliffs are a remarkable tourist attraction, so there is a visitor center and a parking lot on site. There is a path that runs along the cliffs along its entire length.

They are the oldest natural rock structures in Ireland, geologists locate the period of their formation 300 million years ago. These majestic rock formations open towards the Atlantic Ocean offering an observer the sensation of being on the edge of an abrupt wall.

Access : Coordinates: 52.971751, -9.426334 / Bus Eireann Route 350 linking the Cliffs of Moher to a number of locations: Ennis, Ennistymon, Doolin, Lisdoonvarna, Kinvara and Galway. This service offers a number of tours each day. There is a privately operated shuttle bus which serves the site from Doolin.
Car locks currently cost € 8. / To go to the Cliffs, expect a 90 minute journey from Galway city. Wherever you come from the north or south, the cliffs are straight on the R478. There is a regular bus route from Galway, as well as private guided tours from Limerick, Galway and even Dublin.

Attractions :
The Cliffs of Moher was the second most popular tourist attraction in Ireland in 2018 with 1,527,000 visitors. The cliffs are a major part of the Wild Atlantic Way ROUTE.

All of these scenes are excellent at any time, but the sunrise or sunset visits offer all the most colorful scenes. People are taken with them. The peak of visiting times is between 11 am-4pm. The center charges € 8 for an adult, and children under 16 are free. Ferry trips allow tourists to view the cliffs from sea level. Built in 1835, O’Brien’s tower offers the best photographs of Cliffs of Moher. To visit the tower one must have the spiral staircase to climb to the viewing area.
Doolin is the nearest village to the Cliffs of Moher. Doolin is recognized as one of the best places to listen to Irish traditional music. Doolinn is the best place to catch the ferry to the Aran Islands. A boat trip around the base of the cliffs is a unique adventure and you can see the cliffs below. Boats leave daily from Doolin, just north of the Cliffs.
Burren and Cliffs of Moher Geopark : The Cliffs are part of the UNESCO Global Geopark, a special region with outstanding geology
Moher Tower, Hag’s Head. / O’Brien’s Tower. O’Brien’s Tower is a circular stone tower that is located approximately in the middle of the cliffs. It was built by Sir Cornellius O’Brien in 1835 as a lookout for the hundreds of tourists who came to the site even at that time./

Go next : Ennis / Lahinch / Inisheer of the Aran Islands / Scattery Island / Galway is known as the Cultural Heart of Ireland