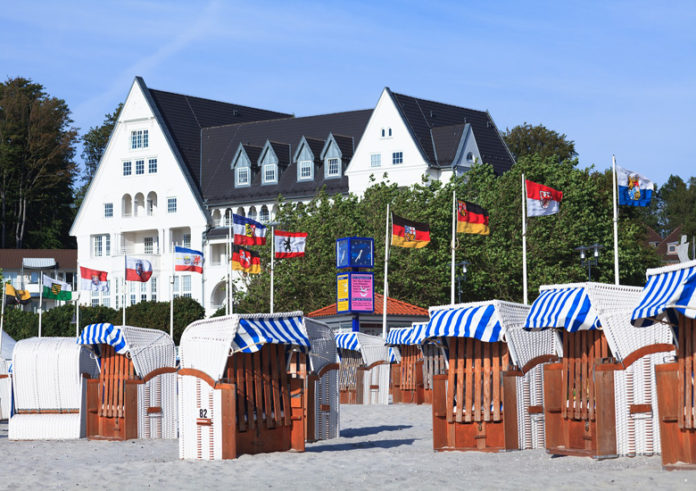 Glucksburg  is a small town in the district Schleswig-Flensburg, in Schleswig-Holstein, Germany and is the farmost northern settlement of Germany.

It is situated on the south side of the Flensborg Fjord, an inlet of the Baltic Sea, approx. 10 km northeast of Flensburg. The town was originally the home of the family Schleswig-Holstein-Sonderburg-Glucksburg (or simply Glucksburg), since 1863 the royal family of Denmark and since 1905 of Norway. A branch of the family is the former royal family of Greece, which includes Prince Philip, Duke of Edinburgh. His descendants, including Charles, Prince of Wales, Prince William, Duke of Cambridge, and Prince George of Cambridge, are members of the House of Windsor under British law, but genealogically are members of a cadet branch of the House of Glucksburg.

Glucksburg is home to a German Navy base. Among the facilities at the base is the transmitter, callsign DHJ58. DHJ58, situated at 54° 50’N and 9° 32′ E, ceased its transmissions on longwave frequency 68.9 kHz in 2002 and in 2004 its longwave antenna was disassembled.

Access : Coordinates : 54.833611, 9.55 / Glucksburg is the northernmost city in Germany and is located on the Flensburg Fjord / by car:  on the A7 to Flensburg – in Flensburg center on the B199 to Glucksburg / by train: Flensburg central station – direct connection by bus to Glucksburg  ,  by plane :  The nearest airpo rt is in Hamburg (about 160 km).

01.12.201823.12.2018 , Fairytale Christmas at Castle Glucksburg :  Let yourself be enchanted by the variety of stalls and stalls with arts and crafts and Christmas accessories, warming mulled wine and children’s punch, a hearty Christmas stollen or a hearty Christmas bratwurst!   Numerous exhibitors and a fir tree lit with sparkling candles in the heart of the courtyard make for a charming ambience in the Glucksburg castle … Appointment: Every Saturday and every Sunday  Time: 10:00 to 20:00