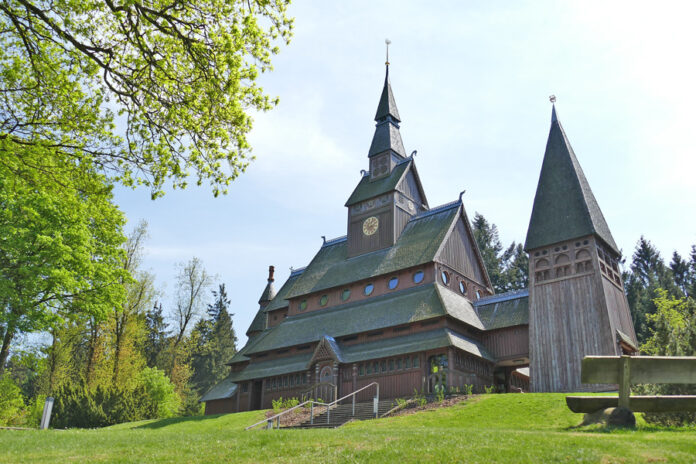 The Gustav-Adolf-Stave Church is a stave church in the Goslar district of Hahnenklee-Bockswiese in the Harz Mountains,Germany.

The church is a copy of Borgund Stave Church in Norway adapted to fulfill its role as Hahnenklee Lutheran parish church. The church is named after the Swedish king Gustav II Adolphus. Construction began in 1907 and the consecration of the church took place on June 28, 1908. Borgund stave church served as an example in the construction of the church. Because the Gustav Adolf Stave Church had to accommodate 350 worshipers, the church is slightly different from the original.
The church can accommodate up to 350 people. After the attic of the old school building gradually became too small for the services to be held, the consistorial architect Karl Mohrmann from Hanover was commissioned to design a church for the Hahnenklee district. Mohrmann once visited Norway and was enthusiastic about the stave churches there. Not least for historical reasons, he suggested building one in Goslar as well.
In a ranking of the 100 most important buildings in Northern Germany, compiled by the Norddeutscher Rundfunk, the church is in 29th place.Especially in the 60s and 70s the stave church was a very popular church to get married. At the time, there were as many as 300 marriages a year. The church is still a popular place to have a wedding.

Go next : The Harz : A low mountain range in the Central Uplands of Germany / Goslar , a historic town in Lower Saxony, Germany. / Bad Gandersheim – a town in South Lower Saxony.