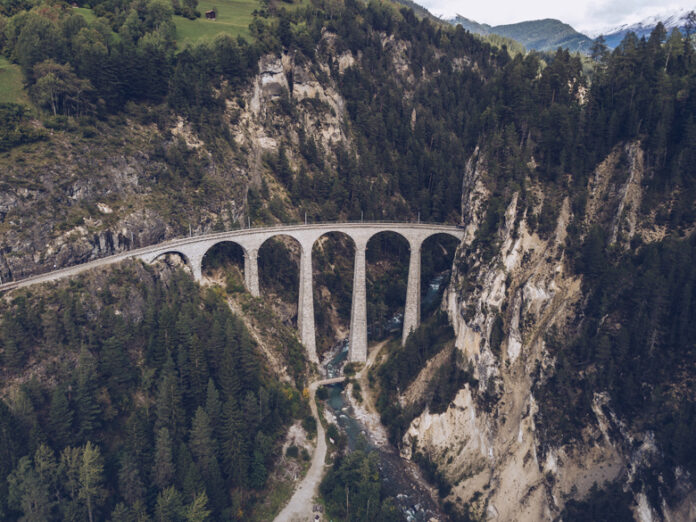 The Landwasser Viaduct, which takes its name from the brook it crosses, is a railroad viaduct in the canton of Grisons in Switzerland.

Construction of the Albula line began in 1898. It involved extensive works and was divided into 11 sections for a total of 55 bridges and 39 tunnels. The Landwasser Gorge was one of the most difficult places to cross, and it was decided to cross this narrow valley by means of a viaduct.
The six-arched Landwasser viaduct is 142 m long and up to 65 m high. Each of the six arches has a span of 20 m. Every year, about 22 thousand trains pass through the viaduct – or 60 rolling stock per day. From the southeast side, the bridge turns into the Landwasser tunnel with a length of 216 m.
The viaduct has been a UNESCO World Heritage Site since July 7, 2008. Under the KGS no. 3009 and 10499, as it is located in two municipal areas, it is included twice on the list of cultural assets of national importance in the canton of Graubünden as the “Schmittentobel-Landwasser Viaduct of the Rhaetian Railway”.