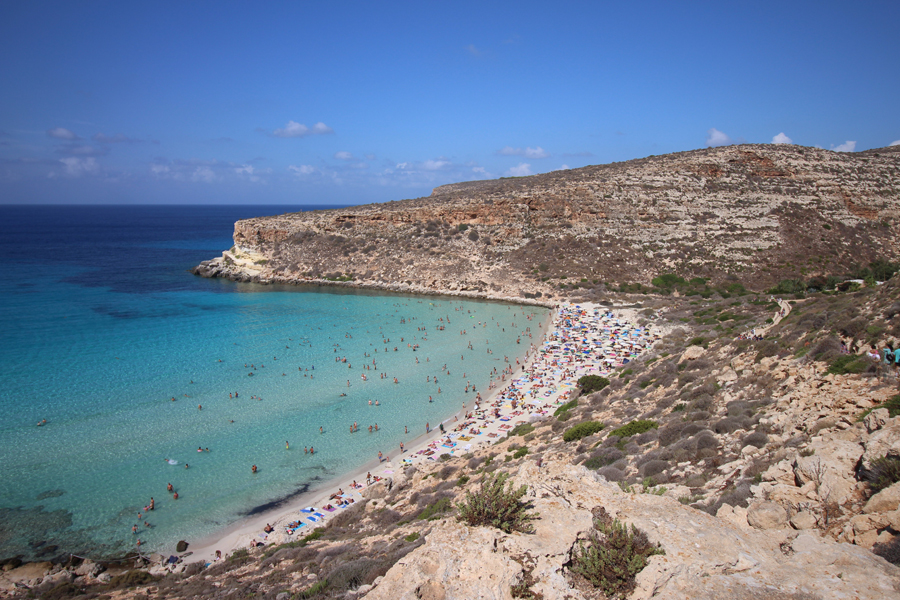 spiaggia dei conigli – Rabbit Beach located in the southern part  on the island of Lampedusa ( Lampedusa is the largest island of the Italian Pelagie Islands in the Mediterranean Sea. ) in the archipelago of the Pelagie islands, in Sicily.Italy.

Isola dei Conigli – Rabbit Island , is very close to the coast and can be reached by swimming from the homonymous “Spiaggia dei Conigli”- Rabbit Beach. The islet is very well known because it gives its name to one of the best known and most popular beaches in Italy, the beach of Conigli.
The islet owes its fame not only to its intrinsic beauty with its pristine bay, the flagship of the Isola di Lampedusa Nature Reserve, with its beach, elected by Tripadvisor users in 2013 the most beautiful beach in the world and in 2014 and 2015 the most beautiful in Europe and in Italy, but also and above all in the presence of an established spawning site of the Caretta Caretta turtle.
Don’t expect to find rabbits, because there aren’t any! In fact, the term Rabit was an Arabic term (rabit = connection / that binds, connects), a language to which Smith had perhaps relied to refer to the sandy isthmus of about 30 meters that rarely forms, at low tide, between the islet and the coast, effectively connecting them to each other.
The beach is part of a protected environmental area. Since 1995, together with the surrounding valleys and Isola dei Conigli, it has been part of the “Isola di Lampedusa” reserve. The protected area was created to protect a precious environment from the point of view of fauna and flora. Here the Caretta Caretta turtle nests. Many specimens choose these places to lay their eggs.

Access : Coordinates: 35.513624, 12.557497 / Lampedusa can be reached daily via sea or air connections. /the island of Lampedusa can be reached from the Port of Porto Empedocle in the Province of Agrigento in about 4 hours, or from the port of Linosa in about 1 hour /
The beach can be reached on foot, by own means or by bus. Regardless of the vehicle used, you will have to cross a dirt road for about 10/15 minutes to get to the beach./ By bus: in summer, every hour from 8:00 to 20:00, the “blue line” buses leave from Piazza Brignone / By car: 18 minutes from the center. Both free and paid parking are available.

Activities : Relax under the warm sun / Snorkeling and diving: are a “must” in Lampedusa and on the suggestive Isola dei Conigli./ Visit Lampedusa and the neighboring islets by boat.

Go next : The town of Lampedusa / Other fascinating beaches: Cala Croce, Cala Pulcino, Cala Creta, Cala Galera, Cala Greca and Guitgia. /  see the Capo Grecale lighthouse, the stone quarry, the Sanctuary of the Madonna di Porto Salvo / The Gate of Europe, the sculpture that indicates the southernmost point of the European continent. 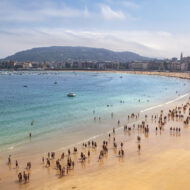 Beach of La Concha
Next Article 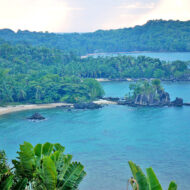