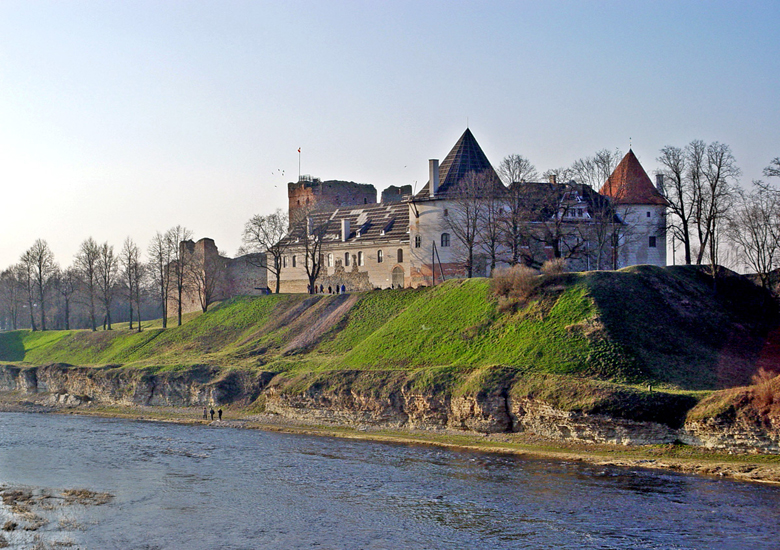 Bauska  is a town in Bauska Municipality, in the Zemgale region of southern Latvia. Bauska is located 66 km from the Latvian capital Riga and 20 km from the Lithuanian border on the busy European route E67. The town is situated at the confluence of the shallow rivers Musa and Memele where they form the Lielupe River. Average temperatures in January are -5C, and 17.5C in July. Rainfall averages 500–650 mm annually. In previous centuries city was known in German as Bauske, in Yiddish as Boisk and in Lithuanian as Bauske. History : By the early 13th century this territory was inhabited by Semigallian tribes. In the mid-15th century, Bauska castle was built by Germans of the Livonian Order, who then were a part of the Terra Mariana confederacy. In the shadow and protection of the castle a small town called Schildburg grew on the narrow peninsula formed by the Musa and Memele rivers. Around 1580 on the orders of Duke Gotthard Kettler this settlement was relocated to the present location of Bauska Old Town, eventually receiving city rights sometime before 1609.

After the Livonian War Bauska became part of the Duchy of Courland and Semigallia and prospered. The castle and city suffered heavily in the 17th and 18th centuries, under attacks from Sweden in the Polish-Swedish War and the Russians in the Great Northern War. In 1706. retreating Russians blow up the castle. In 1711 an outbreak of plague ravaged Bauska, exterminating half of the population, and war returned once more in 1812, when Bauska, after short skirmishes, became one of Napoleon’s army’s transit points en route to Moscow.

Between 1812 and 1914, Bauska enjoyed a period of stability, and grew as a trade center between Riga and Lithuania. Many inhabitants were merchants or worked in ceramic-making, but there was a large brewery and sawmill as well. Bauska was still primarily built of wooden houses: in 1823, only 6 of the 120 houses within the city were built of brick or stone. For this reason, devastating fires were not uncommon. Historically, all social affairs had been in the hands of the privileged Baltic Germans. After 1820 Jews were allowed to settle in the city, and by 1850 made up half the population, diluting the strong German influence.

The city was taken by the German Imperial Army on July 18, 1915, and roughly half the population fled (Jews were moved out on the orders of the Russian army). In 1916, the Germans installed the city’s first electrical grid and built a narrow-gauge railway connection with Jelgava–Meitene Railway. During the Latvian War of Independence Bauska experienced a couple of months of Red Army occupation, followed by the periods of rule by the Baltische Landeswehr and West Russian Volunteer Army until it was liberated in the early hours of November 17, 1919 by the Latvian army.

From 1918 to 1940, the proportion of ethnic Latvians in the population grew strongly, making up 75% of the population, though the Jews and Germans still maintained a noticeable presence. In 1939, just before World War II, virtually the entire Baltic German population of Bauska repatriated to the recently occupied Reichsgau Wartheland, causing the city to lose one of its traditional ethnic populations. As part of the Holocaust during the June–August 1941, Bauska’s other traditional minority, the Jews were exterminated. During the Operation Bagration Soviet army reached Bauska on July 29, 1944. For the next six weeks city was defended by assortment of Latvian policemen, forcibly mobilized Latvian Legion soldiers and Wehrmacht grenadiers. After Soviet shelling and air raids almost one third of the city was destroyed and finally captured on September 14, 1944.

Post-war reconstruction was slow. Rubble remained in the streets until the 1950s. During the Soviet period, the population surpassed 10,000, as the Latvian and especially Russian populations strongly increased. 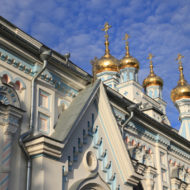 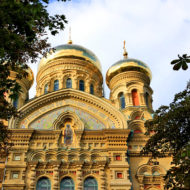