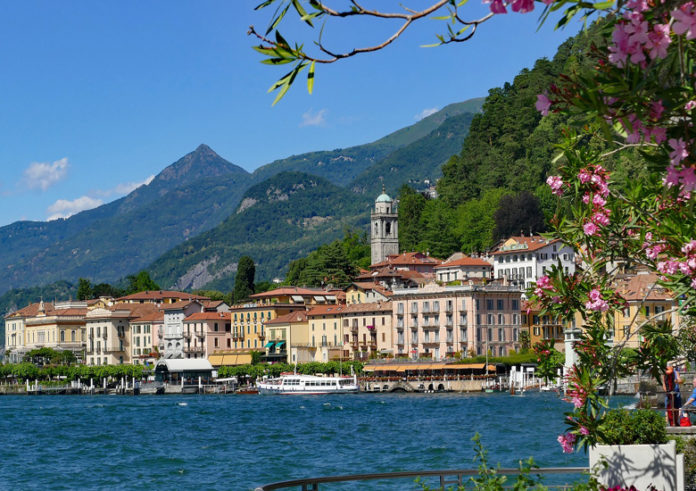 Bellagio is a city in Lombardy, Italy,

situated at the picturesque junction of the three legs of Lake Como. Many celebrities are known to pass through this small Italian town. This fame has become somewhat of a point of pride and some stores display pictures of famous people who have passed through. The name of the town and some of its looks are used by the Bellagio Hotel in Las Vegas.

Access : Coordinates: 45.983333, 9.25 / By car : Bellagio is accessible on either side of the Larian Triangle by slow, narrow and winding roads from Como or Lecco. It is much safer to drive from Como up to Cadenabbia and use the reasonably priced car ferry for the quick trip across to Bellagio. An alternative is to take the four-lane road on the eastern shore of the right arm of the lake to Varenna, then take the ferry to Bellagio. Narrow stone stairs make most of the Borgo inaccessible to cars.

Public buses run daily from Como to Bellagio. By bus : From Como take bus route C30 / By boat : 1 Ferries (Gestione Governativa Navigazione Laghi). connect the village with nearby villages sitting on the shores of the lake, as well as with the towns of Como and Lecco at the SW and SE ends of the lake.
By train : Varenna is the nearest train station, then take a ferry from there, Como and Lecco are other alternatives.

Activities : Take a cruise around the lake.Cycling : From Bellagio starts the climb to the Sanctuary of the Madonna del Ghisallo, the patron saint of cyclists, and therefore an important destination for fans of the sport. The ascent covers a total distance of about 4 km and has a vertical rise of about 500 meters; professional cyclists can do it in 20 minutes. You can also make the climb from Onno to Valbrona on the eastern shore of the lake, and the Wall of Sormano on the road to the western shore. These two climbs, with the ascent to the Sanctuary, are part of the Tris del Lario competition.
Trekking : Treks of all degrees of difficulty are possible around and above Bellagio on the Larian Triangle. Bellagio Lifestyle gives the major treks with maps and route descriptions.