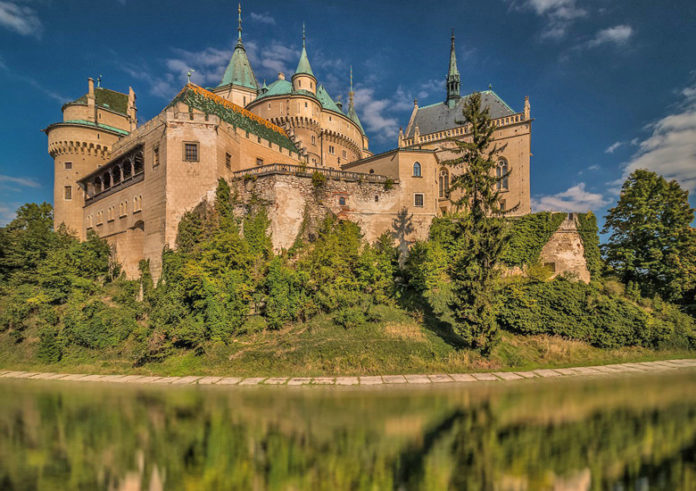 Bojnice Castle  is a medieval castle in Bojnice, Slovakia. It is a Romantic castle with some original Gothic and Renaissance elements built in the 12th century. Bojnice Castle is one of the most visited castles in Slovakia, receiving hundreds of thousands of visitors every year and also being a popular filming stage for fantasy and fairy-tale movies.

History : Bojnice Castle was first mentioned in written records in 1013, in a document held at the Zobor Abbey. Originally built as a wooden fort, it was gradually replaced by stone, with the outer walls being shaped according to the uneven rocky terrain. Its first owner was Matthew III Csak, who received it in 1302 from the King Ladislaus V of Hungary. Later, in the 15th century, it was owned by King Matthias Corvinus, who gave it to his illegitimate son John Corvinus in 1489. Matthias liked to visit Bojnice and it was here that he worked on his royal decrees. He used to dictate them under his beloved linden tree, which is now known as the “Linden tree of King Matthias”. After his death the castle became the property of the Zapolya family (see John Zapolya). The Thurzos, the richest family in the northern Kingdom of Hungary, acquired the castle in 1528 and undertook its major reconstruction. The former fortress was turned into a Renaissance castle. From 1646 on, the castle’s owners were the Palffys, who continued to rebuild the castle.

Finally, the last famous castle owner from the Palffy family, Count Janos Ferenc Palffy (1829-1908), made a complex romantic reconstruction from 1888 to 1910 and created today’s beautiful imitation of French castles of the Loire valley. He not only had the castle built, but also was the architect and graphic designer. He utilized his fine artistic taste and love for collecting pieces of art. He was one of the greatest collectors of antiques, tapestries, drawings, paintings and sculptures of his time. After his death and long quarrels, his heirs sold many precious pieces of art from the castle and then, on 25 February 1939, sold the castle, the health spa, and the surrounding land to Czech entrepreneur Jan Antonin Bata (owner the shoe company Bata). After 1945, when Bata’s property was confiscated by the Czechoslovak government, the castle became the seat of several state institutions. On 9 May 1950, a huge fire broke out in the castle, but it was rebuilt at government expense. After this reconstruction, a museum specializing in the documentation and presentation of the era of architectural neo-styles was opened here. Bojnice Museum is now part of the Slovak National Museum today.

Weddings : The castle chapel is avalaible for weddings and other ceremonies. Designed by an Italian architect, the chapel is one of the most beautiful early baroque buildings in Slovakia. Once a month the chapel holds a (Catholic Christian) workship. Legal weddings have to be arranged in person with the city hall, then you can hire the castle chapel at about 150 USD for the ceremony.

Location: Trenciansky kraj, okres Prievidza, Bojnice : GPS: N48°46’48” E18°34’40” Visitors arriving in cars from Prievidza must turn left at the crossroads in Bojnice and the road will lead them right to the main two-way street in the town where they can park their cars.

Pricelist : Adults: From 7 €
Reduced admission fee: From 3,50 €
Complete pricelist to be clarified by service provider