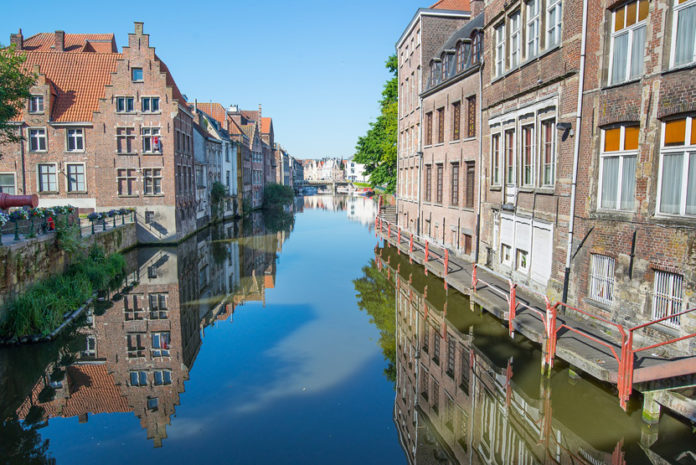 Ghent  is a city  in the Flemish Region of Belgium. It is the capital and largest city of the East Flanders province and after Antwerp the largest municipality of Belgium.

The city started as a settlement at the confluence of the Rivers Scheldt and Leie and in the Late Middle Ages became one of the largest and richest cities of northern Europe, with some 50,000 people in 1300. It is a port and university city. The municipality comprises the city of Ghent proper and the surrounding towns of Afsnee, Desteldonk, Drongen, Gentbrugge, Ledeberg, Mariakerke, Mendonk, Oostakker, Sint-Amandsberg, Sint-Denijs-Westrem, Sint-Kruis-Winkel, Wondelgem and Zwijnaarde. With 260,467 inhabitants in the beginning of 2018, Ghent is Belgium’s second largest municipality by number of inhabitants. The metropolitan area, including the outer commuter zone, covers an area of 1,205 km2 (465 sq mi) and has a total population of 594,582 as of 1 January 2008, which ranks it as the fourth most populous in Belgium. The current mayor of Ghent, Daniel Termont, leads a coalition of the Socialistische Partij Anders, Groen and Open VLD. The ten-day-long Ghent Festival (Gentse Feesten in Dutch) is held every year and attended by about 1–1.5 million visitors.

Architecture :  Much of the city’s medieval architecture remains intact and is remarkably well preserved and restored. Its centre is the largest carfree area in Belgium. Highlights are the Saint Bavo Cathedral with the Ghent Altarpiece, the belfry, the Gravensteen castle, and the splendid architecture along the old Graslei harbour. Ghent has established a blend between comfort of living and history; it is not a city-museum. The city of Ghent also houses three beguinages and numerous churches including Saint-Jacob’s church, Saint-Nicolas’ church, Saint Michael’s church and St. Stefanus. The lwell-known Ghent Altarpiece, a 15th century painting by Hubert and Jan Van Eyck in Saint Bavo Cathedral.
In the 19th century Ghent’s most famous architect, Louis Roelandt, built the university hall Aula, the opera house and the main courthouse. Highlights of modern architecture are the university buildings (the Boekentoren or Book Tower) by Henry Van de Velde. There are also a few theatres from diverse periods.

The beguinages, as well as the belfry and adjacent cloth hall, were recognized by UNESCO as World Heritage Sites in 1998 and 1999. The Zebrastraat, a social experiment in which an entirely renovated site unites living, economy and culture, can also be found in Ghent. Museums :
Important museums in Ghent are the Museum voor Schone Kunsten (Museum of Fine Arts), with paintings by Hieronymus Bosch, Peter Paul Rubens, and many Flemish masters; the SMAK or Stedelijk Museum voor Actuele Kunst (City Museum for Contemporary Art), with works of the 20th century, including Joseph Beuys and Andy Warhol; and the Design Museum Gent with masterpieces of Victor Horta and Le Corbusier. The Huis van Alijn (House of the Alijn family) was originally a beguinage and is now a museum for folk art where theatre and puppet shows for children are presented. The Museum voor Industriele Archeologie en Textiel or MIAT displays the industrial strength of Ghent with recreations of workshops and stores from the 1800s and original spinning and weaving machines that remain from the time when the building was a weaving mill. The Ghent City Museum (Stadsmuseum, abbreviated STAM), is committed to recording and explaining the city’s past and its inhabitants, and to preserving the present for future generations.

Festivities :
The city is host to some big cultural events such as the Gentse Feesten, I Love Techno in Flanders Expo, the “10 Days Off” musical festival, the International Film Festival of Ghent (with the World Soundtrack Awards) and the Gent Festival van Vlaanderen (nl). Also, every five years, an extensive botanical exhibition (Gentse Floralien) takes place in Flanders Expo in Ghent, attracting numerous visitors to the city. The Festival of Flanders had its 50th celebration in 2008. In Ghent it opens with the OdeGand City festivities that takes place on the second Saturday of September. Some 50 concerts take place in diverse locations throughout the medieval inner city and some 250 international artists perform. Other major Flemish cities hold similar events, all of which form part of the Festival of Flanders (Antwerp with Laus Polyphoniae; Bruges with MAfestival  Brussels with KlaraFestival Limburg with Basilica, Mechelen and Brabant with Novecento and Transit). Nature :
The numerous parks in the city can also be considered tourist attractions. Most notably, Ghent boasts a nature reserve (Bourgoyen-Ossemeersen, 230 hectare) and a recreation park (Blaarmeersen, 87 hectares.

Access : Coordinates: 51.05, 3.733333 / By train :  Ghent is only a 30-minute train ride away from Brussels and is on the line from Brussels to Bruges and the coast. If you’re planning to visit Bruges and Brussels, definitely stop over in Ghent as well. There are also direct trains to Brussels Airport (BRU IATA), Antwerp, and Lille. There are two train stations in Ghent, 1 Gent-Dampoort. edit and 2 Gent-Sint-Pieters. edit. Gent-Sint-Pieters is the main station, to go to the center, take tram 1 (until 3 Korenmarkt. edit). Journey time is ten minutes. Gent-Dampoort is located closer to the center (about 15 minutes walk), but only trains coming from/in the direction of Antwerp stop there. If you’re visiting from Bruges, Brussels or Antwerp during the weekend, it’s much cheaper to get a return ticket (special rate: weekend return)

By car :  The dense highway network in Belgium allows you to access Ghent easily by car. Two main highways E40 (Liege-Brussels-Ghent-Bruges-Ostend) and E17 (Antwerp-Ghent-Kortrijk-Lille) cross at Ghent. Brussels and Antwerp are 40 min away, Bruges 30 min. During rush hour you can easily double these times. By plane :
The two biggest airports nearby are Brussels (Zaventem, Belgium) and Lille (France). Direct trains are available from Brussels Airport to Ghent