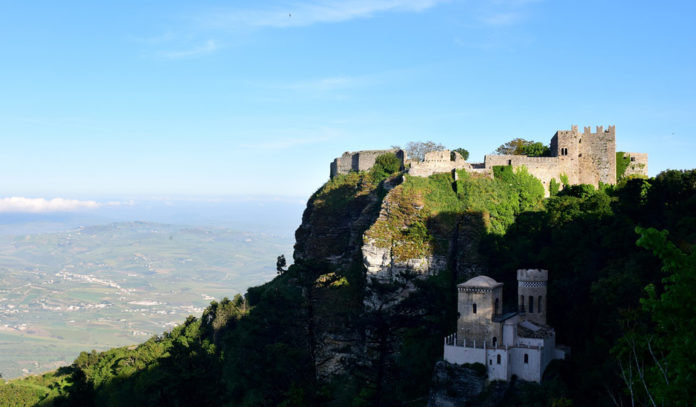 Erice   is a historic town and comune in the province of Trapani in Sicily, Italy.

Geography :  The main town of Erice is located on top of Mount Erice, at around 750 metres (2,460 ft) above sea level, overlooking the city of Trapani, the low western coast towards Marsala, the dramatic Punta del Saraceno and Capo San Vito to the north-east, and the Aegadian Islands on Sicily’s north-western coast. Casa Santa forms part of Erice at the base of Mount Erice, immediately adjacent to Trapani. A cable car joins the upper and lower parts of Erice.

History : The ancient Greek name of Erice was Eryx (Έρυξ in Greek), and its foundation was associated with the eponymous Greek hero Eryx. It was not a Greek colony, as the Phoenicians founded it, but was largely Hellenized. It was destroyed in the First Punic War by the Carthaginians, and from then on declined in importance. Eryx was conquered by Aghlebids in 831 and was renamed as Cebel Hamid (In Western sources Gebel Hamed, meaning Mountain of Hamid). It was ruled by Arabs until the Norman conquest. In 1167 the Normans renamed it Monte San Giuliano. It was known as Monte San Giuliano until 1934.

Activities :  return to Trapani by cable car. It takes about 10 minutes and you have a magnificent view. In Trapani you can take a taxi or a bus to the centre