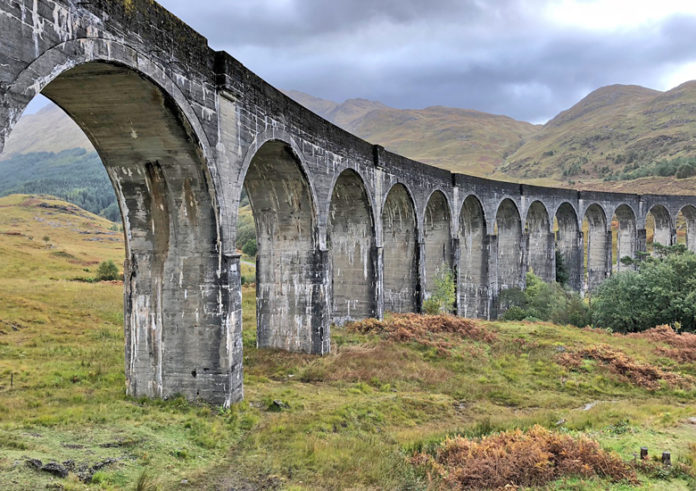 Glenfinnan Viaduct is a concrete viaduct on the territory of the historic county of Inverness-shire in western Scotland – United Kingdom, on the West Highland Line, near the settlement of the same name and Loch Shiel.

It was built between  July 1897 and October 1898 ,The 380-meter-long structure consists of a total 21 arches-spans each 15 m wide. It is the longest concrete railway bridge in Scotland and it was one of the largest engineering projects using concrete without reinforcement at the time of its construction by Sir Robert McAlpine. The River Finnan overcomes at a height of 30 m. The bridge is 5.5 m wide, the only West Highland Line runs along it. The arc radius that the viaduct follows is 241 m.

The railroad used to be important for the local fishing industry, which benefited from the construction of the line. Today, the passenger transport line is driven by diesel trains. Product transportation no longer takes place.
The bridge became one of the Landmarks of this part of Scotland and served as a backdrop for many films and television series, including Ring of Bright Water, Charlotte Gray, Monarch of the Glen, and Stone of Destiny. After it appeared in four of the Harry Potter films, British  Police warned fans not to walk on the viaduct after a handful of near misses with trains had occurred. It is also featured in the 2018 videogame Forza Horizon  .The Glenfinnan Viaduct features on some Scottish banknotes. The 2007 series of notes issued by the Bank of Scotland depicts different bridges in Scotland as examples of Scottish engineering, and the £10 note features the Glenfinnan Viaduct ,Thanks to this, the bridge has become a high visitor attraction.

Access : Coordinates: To reach this place, you will have to join the A830 road, also known as the Road to the Isles./ By bus : There is a bus service to Fort William and Mallaig with the company Shiel Buses, a bus stop also exists at Glenfinnan Monument -Viaduct.

The parking of the visitor’s center costs £ 2 and there are enough seats. after about 100 meters, on the right you will see another parking lot, smaller but free.

Activities : sightseeing / photo opportunities / Scenic Driving- Auto Touring, Glenfinnan and the Loch Shiel are an ideal stopover on this 10-day route through Scotland or on this 3-day route through the Highlands. / Nature Viewing / Walks , Glenfinnan is in an area of hills  and beautiful scenery and it is possible to walk everywhere.