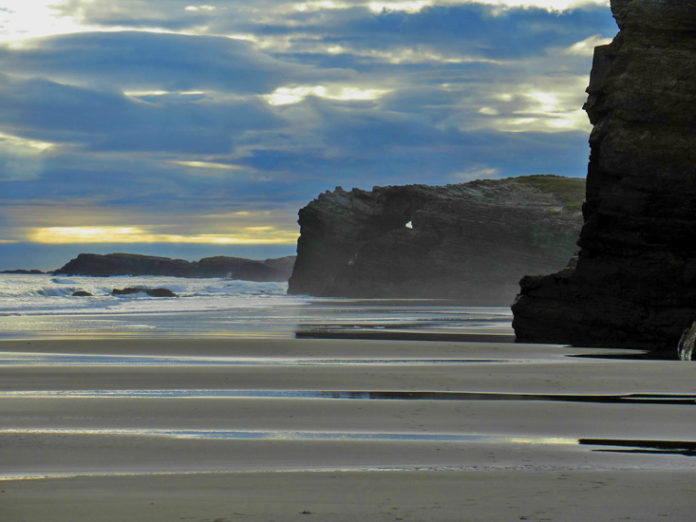 As Catedrais beach translates as ‘Beach of the Cathedrals’. It is the turistic name of Praia de Augas Santas . The Spanish beach is located in the Ribadeo municipality, in the province of Lugo (Galicia), on the Cantabric coast, and it lies about ten kilometres to the west from the town of Ribadeo. Its name is derived from the formations of its cliffs.

It has been declared a Natural Monument by the regional Ministry for the Environment of the Xunta de Galicia.
Overview : The place’s more characteristic features are its natural arches and caves, which can be seen only in low tide. During high tide, the beach appears quite small, but is still suitable to go for a swim. High tide is an interesting time to visit the place and wander over the top of the cliffs, from West to East, heading to the Esteiro Beach. During low tide you can appreciate the size of its magnificent cliffs and the picturesque sea caves, which go from small cracks on the rock to big caves whose roofs collapse due to the erosion of the waves. Also during low tide you can gain access to a sand deposit delimited by a rocky wall made from slate and schist of strange and complex forms: more than 30-meters-tall arches which remind to cathedral flying buttresses, dozen-meters-long caves, sand corridors between rocky blocks and many other curiosities. When low tide is lower than usual, you can access the nearby beaches through the sand extension. However, it is advisable to be back before the water starts to cover the beach again, which happens very quickly, since the coast stretch is almost horizontal.

Access : Coordinates : 43.553889, -7.157222 / From Ribadeo :  There are many ways to reach As Catedrais beach by car from the centre of Ribadeo. The easiest is to take the A-8, where there is a turnoff (516) that leads to the beach. The fastest way is to take the N-634 (10 minutes), and the most scenic route is a secondary road that runs along the coast of the municipality, where you can also do the Route of the beaches.

Taxis or tourist taxes are an alternative way of visiting the beach from Ribadeo. Just sit back and enjoy the view. Ribadeo’s Taxi Service:  Rinconada San Francisco, s/n – 27700 Ribadeo  /  Telephone: 982 128 111

Bus :  Ribadeo’s bus station, on Avenida Rosalia de Castro, links the town centre with other cities in Galicia and part of Spain. The following companies operate from the station:

Arriva which connects Ribadeo with most of Galicia.
Alsa which connects Ribadeo with the rest of the country, especially the Cantabric coast and Madrid. Also, during the summer, visitors can hop on the circular bus at the station. This line does 4 round trips per day connecting the centre of Ribadeo with Playa de As Catedrais. Train :  The Ferrol-Xixon rail line runs along the coast of the municipality, and stops at Os Castros, Rinlo, and Esteiro. The latter is the closest stop to As Catedrais beach (10 minutes on foot).