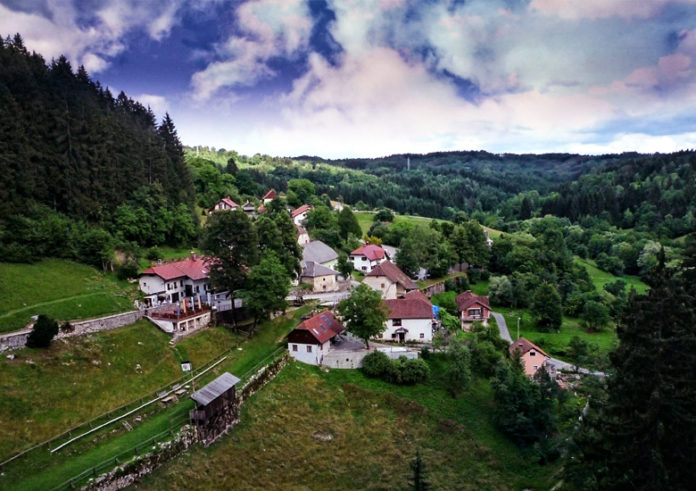 Postojna is a town in the traditional region of Slovenia Carniola Interior-Karst. It is famous for its caves, one of the oldest discovered in the world, and one of the first, if not the first, that became a tourist attraction. In addition, the Predjama Castle is famous, which is located about 10 kms from Postojna.

Postojnais now a  city, famous especially for the complex of its caves. Once part of the Austro-Hungarian Empire, when the cave was discovered, some of the world’s first tourist facilities were inaugurated, allowing visitors from all over the world to visit the cave. Today, these facilities continue to operate, although expanded and adapted to the new times. The Postojna cave receives around 1 million visitors a year.

Access : Coordinates: 45.775864, 14.213661 / By bus : ( From Italy ) On holidays, at 12.35 pm from the bus station in Trieste, the liena bus leaves for Postojna at 13.50, There are also train and bus connections with Ljubljana.
train :
Every day two direct trains depart from Venice to Ljubljana, which also stop in Postojna. The journey takes about 3 hours (the cost to Ljubljana is € 25 in second class). In addition to these there are other connections that however provide for the change of trains and therefore longer journey times./
By plane :
Brnik-Ljubljana airport is about 50 km from Postojna. / By car : Postojna is about one hour west of Ljubljana on the A1 highway. In Trieste pass the former Fernetti border with Slovenia and continue on the motorway towards Postojna. The distance is about 50 km.

How to get around : With public transport :  A tourist train makes the connection between the railway station and the caves, passing through the center of Postojna. / Bicycle hire (in Postojna)

Attractions :
Postojna Caves (Postojnska jama), Jamska cesta 30, Postojna 6230, Slovenia, Open : 9:00 AM – 5:00 PM , Caves about 20 km long, rich in stalagmites and stalactites. They are the only caves in the world that can be visited by train/
Predjama Castle , Predjama 1, Postojna 6230, Slovenia , Open : 9:00 AM – 6:00 PM , Predjama Castle is situated in the middle of a towering cliff, a mere 9 km from Postojna Cave. Picturesque, magnificent, defiant, mysterious and impregnable, it has been dominating the surrounding area, perched high up in the 123-metre high cliff./
Notranjska museum Postojna , Kolodvorska cesta 3, Postojna 6230, Slovenia , Open : 10:00 AM – 6:00 PM , karst phenomena and other attractions of the Green karst with a tour of the new permanent karst exhibition in the Notranjska Museum Postojna./
Toplar hayrack , Belsko 1, Postojna 6230, Slovenia , learn how the hayraks are used in Slovenia./
Pivka Jama , Part of Postojna Cave System, Postojna, The Pivka Cave and the Black Cave are the final two caves along the subterranean Pivka River before the river finally disappears and resurfaces in the Planina Cave./
Planina Cave , Planina 175, Postojna 6232, Planina cave is the largest water cave in Slovenia , Guided tours which take you about 800 meters into the cave , There is also a longer tour that takes you deep in the cave by boats.
Cave under Predjama Castle , Second Slovenian cave in length, the cave below Predjama Castle is on four levels almost totally connected to each other.
proteus or « human fish ». (100 m from the entrance to the Postojna caves) , Speleobiological center where you can discover the underground life that populates these caves. In the caves, in fact, lives the highest number of underground animals in the world.