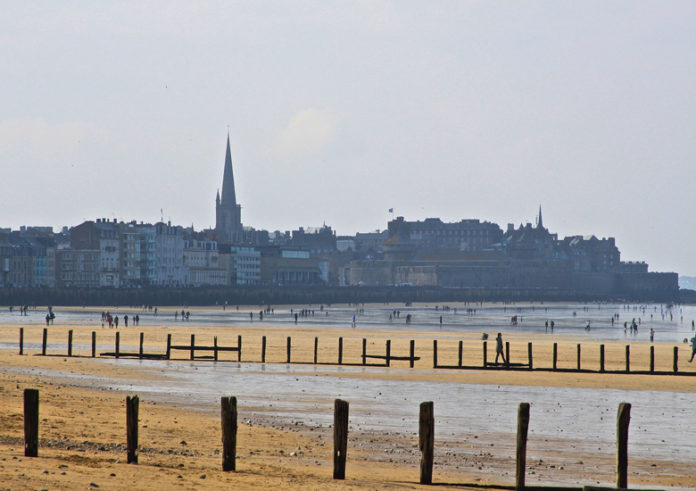 Saint-Malo  is a historic French port in Brittany on the Channel coast. The walled city had a long history of piracy, earning much wealth from local extortion and overseas adventures. In 1944, the Allies heavily bombarded Saint-Malo, mistaking it for a major enemy base. Today it is a popular tourist centre, with a ferry terminal serving Portsmouth, Weymouth, and Poole.

History : Founded by Gauls in the 1st century B.C. The ancient town on the site of Saint-Malo was known as the Roman Reginca or Aletum. By the late 4th century AD the Saint-Servan district was the site of a major Saxon Shore promontory fort that protected the Rance river estuary from seaborne raiders from beyond the frontiers. According to the Notitia Dignitatum the fort was garrisoned by the militum Martensium under a dux (commander) of the Tractus Armoricanus and Nervicanus section of the litus Saxonicum. During the decline of the Western Roman Empire Armorica (modern day Brittany) rebelled from Roman rule under the Bagaudae and in the 5th and 6th centuries received many Celtic Britons fleeing instability across the Channel. The modern Saint-Malo traces its origins to a monastic settlement founded by Saint Aaron and Saint Brendan early in the sixth century. Its name is derived from a man said to have been a follower of Brendan the Navigator, Saint Malo or Maclou, an immigrant from what is now Wales.

Saint-Malo is the setting of Marie de France’s poem “Laustic,” an 11th-century love story. The city had a tradition of asserting its autonomy in dealings with the French authorities and even with the local Breton authorities. From 1590 to 1593, Saint-Malo declared itself to be an independent republic, taking the motto “not French, not Breton, but Malouin.”

Saint-Malo became notorious as the home of the corsairs, French privateers and sometimes pirates. In the 19th century, this “piratical” notoriety was portrayed in Jean Richepin’s play Le flibustier and in Cesar Cui’s eponymous opera. The corsairs of Saint-Malo not only forced English ships passing up the Channel to pay tribute, but also brought wealth from further afield. Jacques Cartier, who sailed the Saint Lawrence River and visited the sites of Quebec City and Montreal, and is thus credited as the discoverer of Canada, lived in and sailed from Saint-Malo, as did the first colonists to settle the Falkland Islands, hence the Islands’ French name “Iles Malouines,” which eventually gave rise to the Spanish name “Islas Malvinas.” In 1758, the Raid on St Malo saw a British expedition land intending to capture the town. However, the British made no attempt on Saint-Malo, and instead occupied the nearby town of Saint-Servan, where they destroyed 30 privateers before departing.

In World War II, during fighting in late August and early September 1944, the historic walled city of Saint-Malo was almost totally destroyed by American shelling and bombing as well as British naval gunfire. The Allies believed that the Axis powers had thousands of troops and major armaments built up within the city walls – though there proved to be fewer than 100 troops manning just two anti-aircraft installations, with the much larger and heavily armed Axis presence in strongpoints outside the city walls. The Americans used napalm for the first time. Saint-Malo was rebuilt over a 12-year period from 1948 to 1960. Saint-Malo is a subprefecture of the Ille-et-Vilaine. The commune of Saint-Servan was merged, together with Parame, and became the commune of Saint-Malo in 1967. Saint-Malo was the site of an Anglo-French summit in 1998 that led to a significant agreement regarding European defence policy.

Access : Coordinates: 48.6481, -2.0075 / By train :  Saint-Malo’s train station is located over a kilometer south of the intramuros area, but it’s an easy 20-min walk straight down Avenue Louis Martin. There are a few direct TGV services daily from Paris (Gare de Montparnasse), which take about three hours. Most travellers, however, will end up connecting in Rennes, from where there are hourly commuter services (50 min, €12) to Saint-Malo.

By ferry :  From the UK you can arrive from Poole on Condor Ferries, or from Portsmouth with Brittany Ferries. From Jersey & Guernsey you can take Condor Ferries which offers direct routes from both islands. By bus :   There are two buses daily to Pontorson (line 17, 1 hour, €2,5), which depart from the train station and stop at the city walls. The buses are timed to connect to onward buses to Mont Saint Michel (20 min, €2,8), allowing a fairly comfortable day-trip. By plane :    Dinard–Pleurtuit–Saint-Malo Airport (DNR IATA). Connections from London Stansted Airport and in summer Guernsey and East Midlands

Attractions : Now inseparably attached to the mainland, Saint-Malo is the most visited place in Brittany. Sites of interest include:

The walled city (La Ville Intra-Muros)
The chateau of Saint-Malo, part of which is now the town museum.
The Solidor Tower in Saint-Servan is a 14th-century building that holds a collection tracing the history of voyages around Cape Horn. Many scale models, nautical instruments and objects made by the sailors during their crossing or brought back from foreign ports invoke thoughts of travel aboard extraordinary tall ships at the end of the 19th and the beginning of the 20th century.
The tomb of the writer Chateaubriand on the Ile du Grand Be
The Petit Be
The Cathedral of St. Vincent (Saint-Malo Cathedral)
The Privateer’s House (“La Demeure de Corsaire”), a ship-owner’s town house built in 1725, shows objects from the history of privateering, weaponry and ship models.
The Great Aquarium Saint-Malo, one of the major aquaria in France.
The labyrinthe du Corsaire, (an attraction park in Saint Malo)
The Pointe de la Varde, Natural Park.
The City of Alet, in front of Saint Malo Intra Muros.
Fort National
Fort de la Conchee

Activities : Watch the impressive tide.
Walk (or jog) along the beach.
Walk around the walls of the walled city (free).
Visit the Festival des Folklores du Monde (World Folklores), which takes place at the beginning of July. There are dance and music performances from around the world. You can also dance when Celtic Breton bands play music in the main square of Parame district.
Look at the many hundreds of sailing boats of all sizes and ages in the harbour/s.

Go next : Visit nearby Mont Saint Michel – a monastery and town built on a tiny outcrop of rock in the sand, which is cut off from the mainland at high tide. It is one of France’s major tourist destinations, and as such gets very busy in high season. Check the times of the tides before you visit!